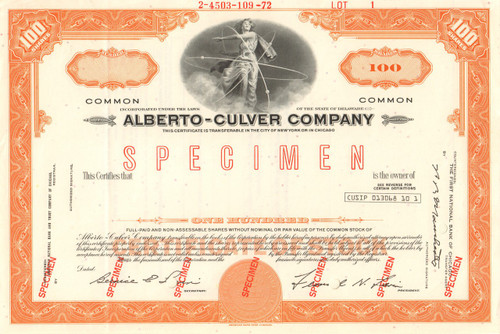 Alberto-Culver was an American corporation with international sales whose principal business is manufacturing hair and skin beauty care products under such brands as Alberto VO5, Andrew Collinge, St. Ives (skin care products), TRESemmé, FDS, Consort, and Nexxus. It is a manufacturer in the multicultural beauty care market with such brands as Soft & Beautiful, Just For Me, Motions, and TCB

The company originated as a Los Angeles beauty supply house with some proprietary products founded by Blaine Culver. The house chemist was named Alberto hence the name Alberto-Culver. Alberto-Culver was purchased and reorganized in 1955 by Leonard H. Lavin who was an entrepreneur and manufacturer's representative for various other companies. The newly created company was then moved to Chicago and a hundred other products were dropped and the company focused on Alberto VO5 shampoo and hairdressing.[2][3] In 1958, Alberto VO5 Hairdressing became the number one brand in its category and it still holds that position today. Lavin and his wife Bernice guided the company's growth until 1994 when they turned it over to a second family generation. Lavin remains a director of today's Alberto-Culver and his daughter Carol Lavin Bernick is the company's executive chairman.

In 2006, the company sought to sell its salon distribution business, which includes Sally Beauty Supply stores and Beauty Systems Group, to Regis Corporation. It later terminated the agreement and on November 10, 2006, shareholders voted to spin off Sally Beauty.

In October 2008, Alberto Culver announced it had closed the transaction to acquire the worldwide rights and trademarks to the Noxzema skin care brand from Procter & Gamble, which includes the existing business in the United States, Canada and parts of Latin America. Procter & Gamble will continue to operate its existing Noxzema shave care, antiperspirant/deodorant, body wash and body soap business in portions of Western Europe.

The UK head office is in Leatherhead, Unilever House and used to be in Chineham, Basingstoke, and the company has a manufacturing plant in Swansea, Wales, where all UK products are produced and also those for some European countries.

Alberto-Culver was purchased by the Anglo-Dutch consumer goods company Unilever on September 27, 2010 for US$3.7 billion. The terms of the acquisition required Unilever to then sell select hair care brands and its entire food business in the USA to other companies to satisfy antitrust concerns (in the late 1990s, Unilever had purchased Alberto-Culver's historic Chicago rival, Helene Curtis). The U.S. food business was bought by B&G Foods, and the U.S. rights to VO5, Rave, and Coast were sold to High Ridge Brands (Unilever owns these brands in the rest of the world). With the reduction in American brands, Unilever closed the former Alberto Culver plant in 2013, laying off 600 workers.