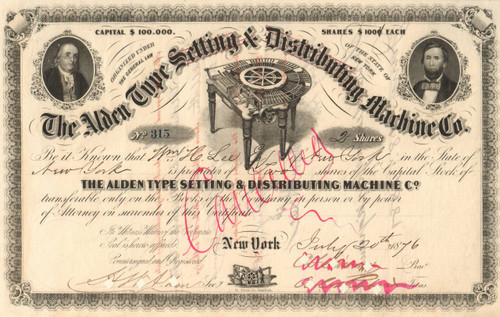 The Alden Typesetting and Distribution Machine, was “perfected” in 1857 and patented in 1868. When it worked it worked surprisingly well. The Alden operator sat at the side of a circular table and pressed a key for each of 154 characters. The 2-foot diameter wheel in the center of the table was rotated by a foot-pedal or any other available power source, and went round picking up types from slots around it where the pieces of type were stored. As the wheel passed a drop point it would drop the types one by one into a tray.

The Alden Company was unable to fulfill the Times‘ order for 12 machines because of lack of capital, and the company was sold, and restructured. The reorganized company added a new angle to their marketing: they suggested that labor problems could be solved by the use of women to run their typesetting machines.

Word spacing was a problem beyond the machine’s brazen brain, as consequently was justification. Spacing the line had to be taken care of separately, and this slowed things down to a point where traditional hand setting was as fast. Apart from spacing, the biggest problem with mechanized typesetting had always been the distribution: getting the bits of type back to the start of the process.

The Aldens had designed a special form of type with grooves identifying each letter. The type could be guided back into its slot by a conveyor belt and sorted by the grooves. However in plants like the World, where printing was done from type not stereos, the traces of ink on the types caused them to become tacky and this would tend to jam the typesetting machine once they were distributed back in there. The Alden machine weighed about 1,500 lbs and had 14,626 separate parts. Getting them all to work smoothly together without breakdown ultimately defeated its developers, and it was overtaken by slicker competition.