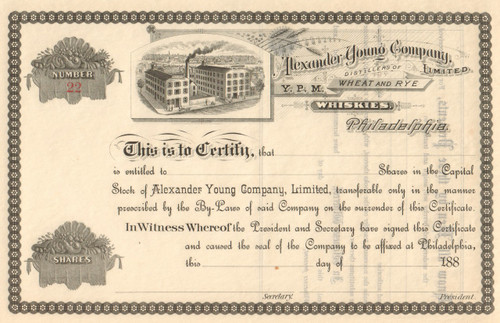 Awesome whiskey collectible.  Very nice vignette of the company's distillery in Philadelphia.  Unissued and not cancelled. Smaller certificate measuring 6" by 8.5". Dated 188- and circa 1887 from incorporation date.

In 1825 there stood at the corner of 4th and South Sts a large building used as a theatre ("Old South St Theatre", formerly "The Apollo"), but as the population moved towards the western and northern part of the city, it was closed and rented to Pat Lyons, another distinguished Irishman, who used it for a hay press. In the fall of 1825, John Maitland bought the building and converted it for use as a distillery at a cost of $20,000. With Young as foreman, they continued their former business on a larger scale. They continued in this way for 12 years, making important discoveries and improvements in the business.

In 1837, John Maitland's son, William J. Maitland, replaced his father as partner Young's partner, and the business continued together until the death of Maitland, in 1847. Although successful, the business had not paid enough to make the deceased partner a man of wealth. Upon the death of his partner, Young bought out the establishment for $20,000. Young at once began to enlarge and improve the facility, spending in a few years over $60,000 on the building and machinery, and adding every improvement and extension that could add to the value of the establishment or the facilities for the business.

By 1864, the distillery was reported to be producing 380,000 gallons of whiskey annually. As of September 1, 1862, 5,000 barrels whiskey were in storage, valued at $200,000. The company used the brand names “Y.P.M.” (Young’s Pure Malt), “Young’s Blue Grass,” and “Young’s Masterpiece.” In December 1882, Ernest Hexamer, a Philadelphia-based insurance surveyor, drew plans of the distillery and noted various details of its operations. He noted that it employed 8-10 men and that the facility included three warehouses.  The still had a capacity of 600 gallons and was made of wood, heated by steam.

Alexander Young died in November 1884 and the distillery was left in the hands of his sons for the next three years. In 1887 a corporation was formed to run the plant. It consisted of Lewis T. Young (President, Alexander's youngest son), Richard Young, (VP), Wilson Young (Secretary and Treasurer, Alexander's elder son), James P. Young and Mrs. Lavinia T. Davison. Hexamer resurveyed the property in 1891. The principal changes in the last ten years included the addition of a new copper still (capacity 400 gallons) and a large bonded warehouse on Charles St. It held 7,000 barrels in racks, a four-story plus basement brick building with a tin roof.

The new bonded warehouse had been approved at a meeting of the board of managers in October, 1889. It required that the company buy the properties of Mr Richard Young at 614 Charles St and Mr Lewis T. Young at 618-622 Charles St. The same meeting resolved that the president, secretary and treasurer be authorized and empowered to have built a new still, worm tub and all the necessary appliances. The board approved construction of the new warehouse at a special meeting held in February, 1890. Here they resolved to "accept the contract of George P. Payne & Co. for $22,399 to erect a new storehouse on Charles Street (west side), according to the plans and specifications of Geo W. and W. S. Hewitt, Architect.”  The addition of the new still meant that by 1891, the plant was producing 7,500 barrels per annum, with a daily grain consumption of 300 bushels.

The company ceased listings in Philadelphia directories in 1921, a victim of Prohibition.  In the 1950s the company's flagship brand, Young's Special American Blended Whiskey was purchased by Kasseer Distillers Product Corp at 3rd and Luzerne Streets in Philadelphia.  The Young plant was closed and the brand bottled by Kasser until October 1989.  The brand was then sold to Laird & Co. of Scobeyville, New Jersey.