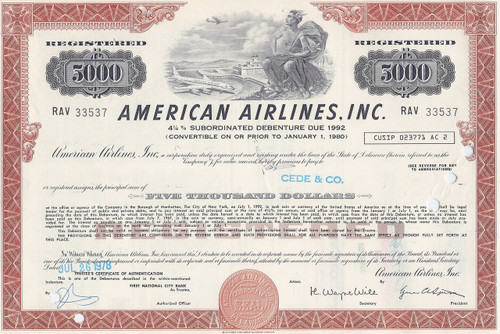 Great airline piece with an interesting vignette of seated Greek male figure holding a caduceus in front of an airport scene with American jet liners. Issued and cancelled. Different colors have different denominations as pictured.  Dated 1970's.  Note that this is version one of two designs of AA bonds during this time.  See our other offering of version 2 (different vignette).

American Airlines is the world's largest airline by passengers flown, fleet size and revenue. It also has the second-most destinations, only after United Airlines.  The former parent company of American Airlines, AMR Corporation, filed for Chapter 11 bankruptcy protection in November 2011. AMR and US Airways Group completed the merger on December 9, 2013.  The airline's main competitors are Delta, United, and Southwest. American Airlines has merged with several carriers since its formation in 1930 (which itself happened by a merger of 80 carriers), these have included Trans Caribbean Airways in 1971, Air California in 1987, Trans World Airlines (TWA) London Heathrow Airport Routes in 1990, Reno Air in 1999, Trans World Airlines (TWA) itself in 2001, and US Airways in 2013.

American Airlines was developed from a conglomeration of 82 small airlines through acquisitions in 1930[16] and reorganizations: initially, American Airways was a common brand by a number of independent carriers. These included Southern Air Transport in Texas, Southern Air Fast Express in the western United States, Universal Aviation in the Midwest, Thompson Aeronautical Services and Colonial Air Transport in the Northeast. Like many early carriers, American earned its keep carrying U.S. Mail. By 1933 American Airways operated a transcontinental route network serving 72 cities, mostly in the northeastern, midwestern, and southwestern United States.

In 1934 American Airways Company was acquired by E. L. Cord, who renamed it "American Air Lines". Cord hired Texas businessman C. R. Smith to run the company. Smith worked with Donald Douglas to develop the DC-3, which American Airlines was first to fly, in 1936. American's DC-3 made it the first airline to be able to operate a route that could earn a profit solely by transporting passengers; other carriers could not earn a profit without U.S. Mail. With the DC-3, American began calling its aircraft "Flagships" and establishing the Admirals Club for valued passengers. The DC-3s had a four-star "admiral's pennant" outside the cockpit window while the aircraft was parked.

American Airlines was the first to cooperate with Fiorello LaGuardia to build an airport in New York City, and became owner of the world's first airline lounge at the new LaGuardia Airport (LGA), known as the Admirals Club. Membership was initially by invitation only, later changing to an open policy that accepted members who paid dues.