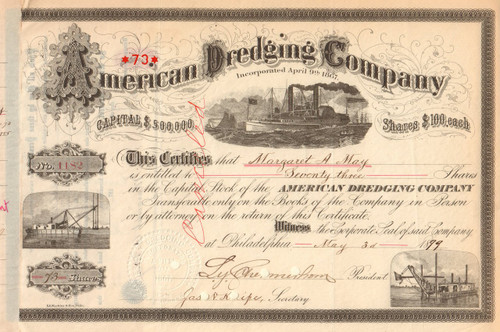 American Dredging Company, one of Pennsylvania's oldest Dredging Companies. They began operations in 1867 in Philadelphia, with help from the Dredge Atlantic and Baltic. By 1878 they had over a dozen dredges, barges, locomotives, pile drivers and tugboats, that worked tirelessly along the Delaware River. The company built the land necessary for large sections of the Pennsylvanian Railroad , along with driving the piles for their bridges. They also deepened and widened the Channels through the Delaware for deep drafting modern vessels.  During their 125 years of history they dug up many of Americas most famous shipwrecks. One ship was the British HMS Augusta sunk one fire fiery night by American guns, off Fort Mercer. Another was the Alliance sailed by John Paul Jones and a participant in the bloody battle of Flamborough Head.

Weeks Marine is an American marine construction and dredging company based in Cranford, NJ. It was founded by Francis Weeks and his son Richard B. Weeks in 1919 as the Weeks Stevedoring Company. By the beginning of World War II, they had purchased their seventh crane and were loading military equipment bound for Europe to support the Allied Forces.   In the 1950s, the Weeks Stevedoring Company ventured into a number of marine projects outside the field of stevedoring. The company performed salvage and dredging work, installed navigational aids for the United States Coast Guard, and even constructed a breakwater to protect the air shaft leading from the Brooklyn–Battery Tunnel to Governors Island.