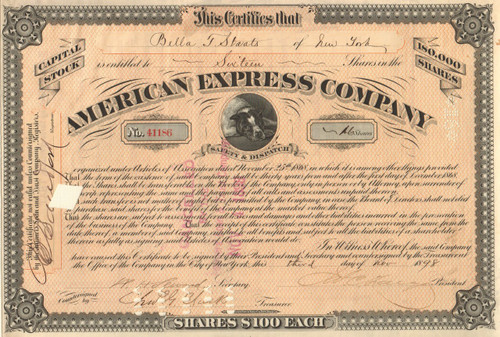 Premium collector piece offered at a great price.  Classic vignette of a terrier (traditional mascot of AMEX before the centurion) with Safety and Dispatch below. Issued and cancelled. Hole punch cancellation at the bottom and side.  Cancelled stamp on certificate face. Measures approx. 8" by 11.25". James Fargo signs as president. Dated 1898.

James Congdell Strong Fargo  (J. C. Fargo) was born in Watervale, New York, a hamlet Onondaga County northeast of Pompey, New York. He was the seventh of eleven children born to William Congdell Fargo and Stacy Chappel Strong. Fargo attended public school. When he was fifteen, he moved to Buffalo, New York to work for his brother William Fargo, who was running express lines between Buffalo, Detroit, Michigan and Albany, New York. Originally a clerk, Fargo was eventually tasked with the delivery of money packages. In 1847, Fargo was granted control of operations in Detroit. Four years later, when the company was organized as Wells Fargo & Company, Fargo was named Superintendent of Virginia operations.

The American Express Company, also known as Amex, is an American multinational financial services corporation headquartered in New York City, United States. Founded in 1850, it is one of the 30 components of the Dow Jones Industrial Average. The company is best known for its credit card, charge card, and traveler's check businesses. Amex cards account for approximately 24% of the total dollar volume of credit card transactions in the US.

American Express started out in 1850 as a freight and valuables delivery service for the rapidly expanding nation. The fledgling U.S. Postal Service was unreliable at the time and only allowed shipment of letter-sized envelopes. This provided a business opening for the company to ship larger parcels and valuable items such as jewelry, cash, stock certificates and other merchandise. The company took a turn when it began to realize more profit from a sector of its customer base that included banks and other financial institutions. Banks placed a high value on American Express' secure and reliable delivery service for interbank transfers and drafts made between eastern cities and the growing western territories. American Express then began focusing its efforts on this sector and used its connections to eventually enter the financial services arena.

In 1882, American Express started its expansion in the area of financial services by launching a money order business to compete with the United States Post Office's money orders. Sometime between 1888 and 1890, J. C. Fargo took a trip to Europe and returned frustrated and infuriated. Despite the fact that he was president of American Express and that he carried with him traditional letters of credit, he found it difficult to obtain cash anywhere except in major cities. Fargo went to Marcellus Berry and asked him to create a better solution than the traditional letter of credit. Berry introduced the American Express Traveler's Cheque which was launched in 1891.

Traveler's cheques established American Express as a truly international company. In 1914, at the outbreak of World War I, American Express offices in Europe were among the few companies to honor the letters of credit held by Americans in Europe, because other financial institutions refused to assist these stranded travelers.

American Express became one of the monopolies that President Theodore Roosevelt had the Interstate Commerce Commission (ICC) investigate during his administration. The interest of the ICC was drawn to its strict control of the railroad express business. The solution to this problem came as a coincidence to other problems during World War I.  In 1917, the United States suffered a severe coal shortage and President Woodrow Wilson commandeered the railroads on behalf of the US government. All contracts between express companies and railroads were nullified. The result was that a new company called the American Railway Express Agency formed in July 1918.

In the 1950s, American Express issued its first credit card, which caught on quickly in the booming postwar economy. In 1966, the company issued its first gold card, in an effort to cater to the upper echelon of business travel. Its platinum card debuted in the 1990s. During the 1980s, American Express embarked on an effort to become a financial services super company and made a number of acquisitions to create an investment banking arm. In mid-1981 it purchased Sanford I. Weill's Shearson Loeb Rhoades, the second largest securities firm in the United States to form Shearson/American Express. In 1984, American Express acquired the investment banking and trading firm, Lehman Brothers Kuhn Loeb, and added it to the Shearson family, creating Shearson Lehman/American Express.