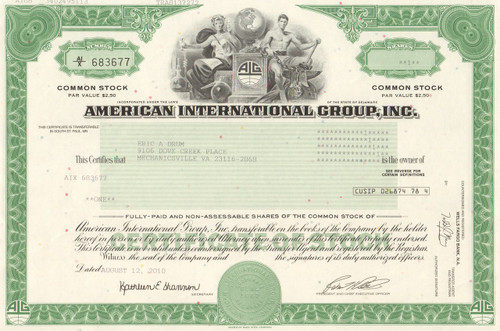 American International Group (AIG) was founded in 1919. AIG was the subject of the 2008 Federal Reserve bailout due to the company’s liquidity problems

AIG traces its roots back to 1919, when American Cornelius Vander Starr (1892-1968) established a general insurance agency, American Asiatic Underwriters (AAU), in Shanghai, China. Business grew rapidly, and two years later, Starr formed a life insurance operation. By the late 1920s, AAU had branches throughout China and Southeast Asia, including the Philippines, Indonesia, and Malaysia. In 1926, Mr. Starr opened his first office in the United States, American International Underwriters Corporation (AIU). He also focused on opportunities in Latin America and, in the late 1930s, AIU entered Havana, Cuba. The steady growth of the Latin American agencies proved significant as it would offset the decline in business from Asia due to the impending World War II. In 1939, Mr. Starr moved his headquarters from Shanghai, China, to New York City.

In 1960, C.V. Starr hired Maurice R. Greenberg to develop an international accident and health business. Two years later, Mr.Greenberg reorganized one of C.V. Starr’s U.S. holdings into a successful multiple line carrier. Greenberg focused on selling insurance through independent brokers rather than agents to eliminate agent salaries. Using brokers, AIU could price insurance according to its potential return even if it suffered decreased sales of certain products for great lengths of time with very little extra expense. In 1967, American International Group, Inc. (AIG) was incorporated as a unifying umbrella organization for most of C.V. Starr’s general and life insurance businesses. In 1968, Starr named Greenberg his successor. The company went public in 1969.

The 1970s presented many challenges for AIG as operations in the Middle East and Southeast Asia were curtailed or ceased altogether due to the changing political landscape. However, AIG continued to expand its markets by introducing specialized energy, transportation, and shipping products to serve the needs of niche industries. By 1979, with a growing workforce and a worldwide network of offices, AIG offered clients superior technical and risk management skills in an increasingly competitive marketplace.

AIG faced the most difficult financial crisis in its history when a series of events unfolded in late 2008. The insurer had sold credit protection through its London unit in the form of credit default swaps (CDSs) on collateralized debt obligations (CDOs) but they had declined in value. The AIG Financial Products division, headed by Joseph Cassano, in London, had entered into credit default swaps to insure $441 billion worth of securities originally rated AAA. Of those securities, $57.8 billion were structured debt securities backed by subprime loans.

As a result, AIG’s credit rating was downgraded and it was required to post additional collateral with its trading counter-parties, leading to a liquidity crisis that began on September 16, 2008 and essentially bankrupted all of AIG. The United States Federal Reserve Bank stepped in, announcing the creation of a secured credit facility of up to US$85 billion to prevent the company's collapse, enabling AIG to deliver additional collateral to its credit default swap trading partners. The credit facility was secured by the stock in AIG-owned subsidiaries in the form of warrants for a 79.9% equity stake in the company and the right to suspend dividends to previously issued common and preferred stock. The AIG board accepted the terms of the Federal Reserve rescue package that same day, making it the largest government bailout of a private company in U.S. history.