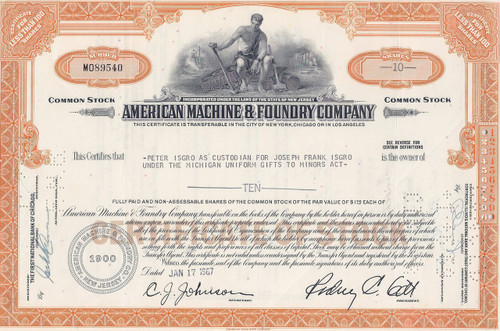 Great vignette of a seated Greek male figure with hammers and tools in front of industrial scenes. Issued and cancelled. Various dates in the 1960s.

Later known as AMF. Owned Harley-Davidson motorcycle brand. Founded to make automated machines for the tobacco industry.  The company continued to expand its activities in automated machinery into many areas including, just prior to World War II the automatic pinspotter. The war effort delayed the introduction of this latter proposal until 1959 when it revolutionized tenpin bowling and touched off a boom in the sport.

Involvement with tenpin bowling led AMF into a broad range of sporting equipment during the 1960's and 70's including Head tennis rackets and skis, Tyrolia bindings, Ben Hogan golf clubs, Voit inflatable balls, Mares scuba gear, Hatteras yachts and many other products such as snowmobiles, bicycles, and children's toys.