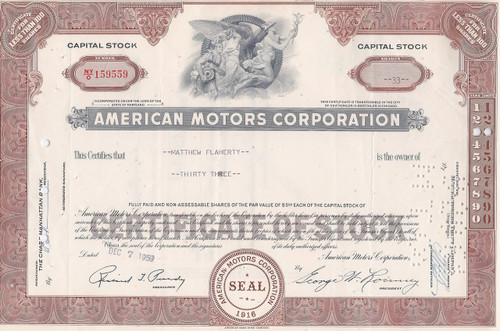 George Wilcken Romney (July 8, 1907 – July 26, 1995) was an American businessman and Republican Party politician. He was chairman and president of American Motors Corporation from 1954 to 1962, the 43rd Governor of Michigan from 1963 to 1969, and the United States Secretary of Housing and Urban Development from 1969 to 1973. He was the father of former Governor of Massachusetts and 2012 Republican presidential nominee Mitt Romney and the husband of former Michigan U.S. Senate candidate Lenore Romney.

American Motors was formed from the merger of Nash and Hudson in 1954, and ended with the merger of AMC into Chrysler in 1987. AMC was a survivor: the last American Independent, the company that outlived Packard, Studebaker, Kaiser, Auburn, Cord, Dusenberg, and all the rest.

AMC went through many changes of fortune and focus in its 33 years. After a very rocky start that saw the old Nash and Hudson brands fade away, the company found its niche as a specialty maker of small, practical Ramblers, and sales quadrupled in just a few years.  The early 60's were AMC's glory years, when Rambler twice took third place in model year sales and the whole line earned Motor Trend's "Car of the Year" award. But the company soon lost its focus, and sales tumbled. The Rambler name was phased out, replaced by "American Motors" as the brand, and later "AMC".

In the late 60's and early 70's AMC had a brief but memorable flirtation with high performance and racing that produced collectible classics like the Javelin, AMX, SC/Rambler, and Machine and brought younger customers into the showrooms.

The company enjoyed another brief heyday in the economic recessions of the 70's, again because of its reputation for practicality. AMC's two most unusual cars of that decade, the Gremlin and Pacer, have become pop-culture symbols of the era of arena rock and disco.

AMC ultimately couldn't cope with foreign competition and federal regulations, and it had to evolve yet again to survive. In its final years, AMC was primarily a manufacturer of non-AMC vehicles: cars designed by Renault, which bought a controlling interest in the company, and the Jeep line, acquired from Kaiser in 1970. Finally, Renault sold out to Chrysler in 1987, and the Last Independent was history.