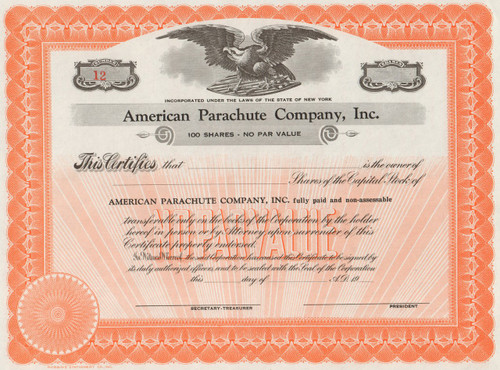 Interesting parachute company piece from the World war 2 era.  Unissued and not cancelled.  The cert boasts a nice vignette with wings spread and perched on an American shield.  Unissued but circa 1942.

The company made parachutes during World War II in Lowell, MA.  The Massachusetts textile town supported the war effort  In early 1942, the American Parachute Company began hiring women in Lowell; by year's end this one company had a workforce of over 1,000 women. Local shoe factories also came back to life with orders for military footwear.  Other defense companies were also drawn to Lowell. Remington Arms, General Electric, and U.S. Rubber offered women decent wages and working conditions and the chance to learn new skills. When the war ended, the government reversed its policy and called on women to quit their jobs so returning veterans could have them. Many women for whom war work was not an economic necessity willingly complied. Others were forced out of their higher-paying skilled jobs and back to the ranks of unskilled, underpaid workers.