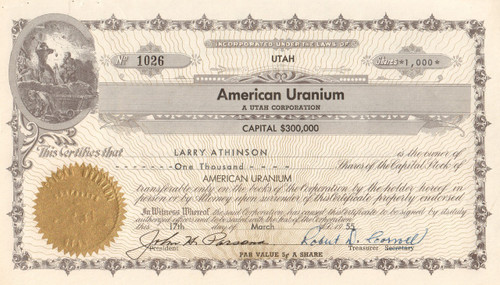 The company mined uranium ore in the Moab area to support refining for nuclear plants being built during the era.  It is the predecessor to today's American Uranium Corporation.

American Uranium Corporation (American Uranium) is an exploration-stage company engaged in the acquisition and exploration of mineral property interests in the United States. The Company has an option and LLC agreement with Strathmore Resources (US) Ltd. Pursuant to the agreement, the Company has an option to earn-in a 60% interest in Strathmore's Pinetree-Reno Creek uranium property. The Pinetree-Reno Creek Property is located in the central Powder River Basin, within the Pumpkin Buttes Uranium District, and encompasses approximately 16,000 acres. On March 9, 2009, the Company dissolved its wholly owned subsidiary, American Uranium Corporation.

The area mining is most recently famous for a mine sale (Uranium One) to a Russian holding company after the Secretary of State Hillary Clinton administration approved the sale while receiving "donations" to the Clinton Foundation and huge speech compensation to Bill Clinton, prompting inquiries and accusations of bribery during her national security tenure. Whether the donations played any role in the approval of the uranium deal is unknown. But the episode underscores the special ethical challenges presented by the Clinton Foundation, headed by a former president who relied heavily on foreign cash to accumulate $250 million in assets even as his wife helped steer American foreign policy as secretary of state, presiding over decisions with the potential to benefit the foundation’s donors.