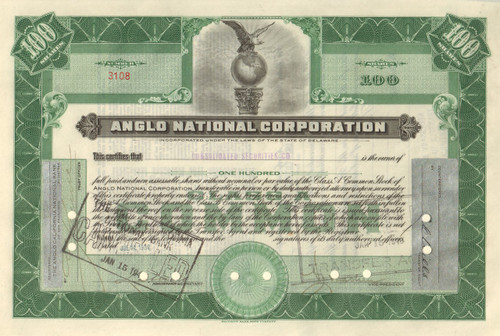 The Anglo National Corporation was founded in 1908 as the London-Paris National Bank of San Francisco. In 1909, the bank’s name was changed to The Anglo & London Paris National Bank. In 1932, the company adopted the name the Anglo California National Bank of San Francisco. In November of 1955, the company merged into Crocker First National Bank. Crocker National Bank was purchased by the British financial institution Midland Bank in 1981, but after a series of financial losses it was sold on to Wells Fargo Bank in 1986. As of January 2012 Wells maintains the Crocker name as a current federally registered trademark at its "Crocker Office Branch" at 1 Montgomery St. San Francisco, California in a wall display of the Crocker Bank history.