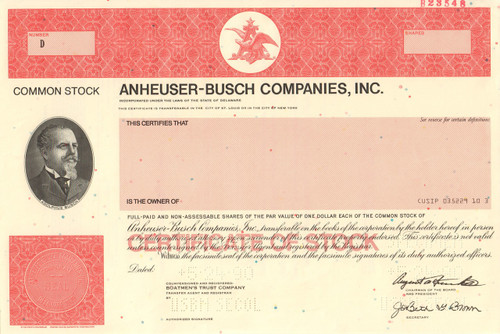 Very rare printer specimen certificate. Great left side vignette of Adolphus Busch and a top in-border logo of the company.  Circa 1990 from the printer perforation (United States Banknote).

In 1852, German American brewer and saloon operator George Schneider opened the Bavarian Brewery on Carondelet Avenue (later known as South Broadway) between Dorcas and Lynch streets in South St. Louis. Schneider's brewery expanded in 1856 to a new brewhouse near Eighth and Crittenden streets. In 1860, the brewery was purchased on the brink of bankruptcy by William D'Oench, a local pharmacist, and Eberhard Anheuser, a prosperous German-born soap manufacturer. D'Oench was the silent partner in the business until 1869, when he sold his half-interest in the company. From 1860 to 1875, the brewery was known as E. Anheuser & Co., and from 1875 to 1879 as the E. Anheuser Company's Brewing Association.

Adolphus Busch, a wholesaler who had immigrated to St. Louis from Germany in 1857, married Eberhard Anheuser's daughter, Lilly, in 1861. Following his service in the American Civil War, Busch began working as a salesman for the Anheuser brewery. Busch purchased D'Oench's share of the company in 1869, and he assumed the role of company secretary from that time until the death of his father-in-law.

Anheuser-Busch was one of the first companies to transport beer nationwide using railroad refrigerator cars. Adolphus Busch was the first American brewer to use pasteurization to keep beer fresh; the first to use mechanical refrigeration and refrigerated railroad cars, which he introduced in 1876; and the first to bottle beer extensively. By 1877, the company owned a fleet of 40 refrigerated railroad cars to transport beer. Expanding the company's distribution range led to increased demand for Anheuser products, and the company substantially expanded its facilities in St. Louis during the 1870s.

To streamline the company's refrigerator car operations and achieve vertical integration, Busch established the St. Louis Refrigerator Car Company in 1878, which was charged with building, selling, and leasing refrigerator cars; by 1883, the company owned 200 cars, and by 1888 it owned 850. To serve these cars and switch them in and out of their St. Louis brewery, Anheuser-Busch founded the Manufacturers Railway Company in 1887. The shortline operated until 2011 when Anheuser-Busch sought to shut down operations.

During the 1870s, Adolphus Busch toured Europe and studied the changes in brewing methods which were taking place at the time, particularly the success of pilsner beer, which included a locally popular example brewed in Budweis. In 1876, Busch introduced Budweiser, with the ambition of transcending regional tastes. His company's ability to transport bottled beer made Budweiser the first national beer brand in the United States, and it was marketed as a "premium" beer.

The company was renamed Anheuser-Busch Brewing Association in 1879; in 1880, Adolphus Busch became company president upon Anheuser's death. The Busch family fully controlled the company through the generations until Anheuser-Busch's sale to InBev in 2008.