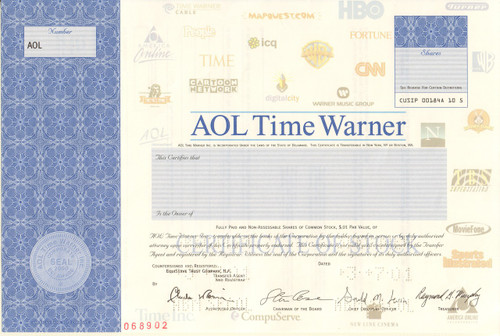 Time Warner Inc. is an American multinational media corporation headquartered in the Time Warner Center in New York City. It is currently the world's third largest television networks and filmed TV & entertainment company in terms of revenue (behind Comcast and The Walt Disney Company), and at one time was the world's largest media conglomerate.

In 2000, AOL purchased Time Warner for US$164 billion.  The deal employed a merger structure in which each original company merged into a newly created entity. Due to the larger market capitalization of AOL, their shareholders would own 55% of the new company while Time Warner shareholders owned only 45%,so in actual practice AOL had acquired Time Warner, even though Time Warner had far more assets and revenues.

The 2001 AOL merger was 'the biggest mistake in corporate history', believes Time Warner chief Jeff Bewkes. AOL Time Warner, Inc., as the company was then called, was supposed to be a merger of equals with top executives from both sides. Gerald Levin, who had served as CEO of Time Warner, was CEO of the new company. Steve Case served as Executive Chairman of the board of directors, Robert W. Pittman (President and COO of AOL) and Dick Parsons (President of Time Warner) served as Co-Chief Operating Officers, and J. Michael Kelly (the CFO from AOL) became the Chief Financial Officer.

Unfortunately, the growth and profitability of the AOL division stalled due to advertising and subscriber slowdowns in part caused by the burst of the dot-com bubble and the economic recession after September 2001. The value of the America Online division dropped significantly, not unlike the market valuation of similar independent internet companies that drastically fell, and forced a goodwill write-off, causing AOL Time Warner to report a loss of $99 billion in 2002 — at the time, the largest loss ever reported by a company. The total value of AOL stock subsequently went from $226 billion to about $20 billion.

An outburst by Vice Chairman Ted Turner at a board meeting prompted Steve Case to contact each of the directors and push for CEO Gerald Levin's ouster. Although Case's coup attempt was rebuffed by Parsons and several other directors, Levin became frustrated with being unable to "regain the rhythm" at the combined company and announced his resignation in the fall of 2001, AOL Chairman and CEO Barry Schuler was removed from his position and placed in charge of a new "content creation division", being replaced on an interim basis by Pittman, who was already serving as the sole COO after Parsons' promotion.

Pittman announced his resignation as AOL Time Warner COO after July 4, 2002, being reportedly burned out by the AOL special assignment and almost hospitalized, unhappy about the criticism from Time Warner executives, and seeing nowhere to move up in firm as Parsons was firmly entrenched as CEO. In a sign of AOL's diminishing importance to the media conglomerate, Pittman's responsibilities were divided between two Time Warner veterans; Jeffrey Bewkes who was CEO of Home Box Office, and Don Logan who had been CEO of Time.

AOL Time Warner Chairman Steve Case took on added prominence as the co-head of a new strategy committee of the board, making speeches to divisions on synergism and the promise of the Internet. However, under pressure from institutional investor vice president Gordon Crawford who lined up dissenters, Case announced in January 2003 that he would not stand for re-election as executive chairman in the upcoming annual meeting, making CEO Richard Parsons the chairman-elect. That year, the company dropped the "AOL" from its name, and spun off Time-Life's ownership under the legal name Direct Holdings Americas, Inc. Case resigned from the Time Warner board on October 31, 2005.

On May 28, 2009, Time Warner announced that it would spin off AOL as a separate independent company, with the change occurring on December 9, 2009.