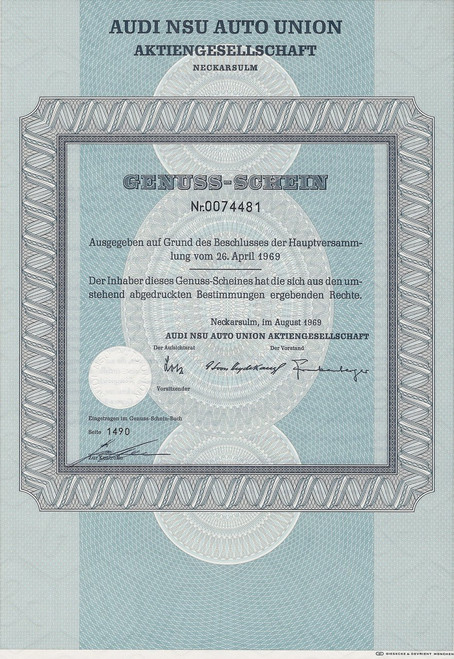 Audi has been a majority owned (99.55%) subsidiary of Volkswagen Group since 1966, following a phased purchase of Audi AG's predecessor, Auto Union, from Daimler-Benz.  Volkswagen re-launched the Audi brand in 1965.

The company name is based on the Latin translation of the surname of the founder, August Horch. "Horch", meaning "listen" in German, becomes "audi" in Latin. The four rings of the Audi logo each represent one of four car companies that banded together to create Audi's predecessor company.

Originally in 1885, automobile company Wanderer was established, later becoming a branch of Audi AG. Another company, NSU, which also later merged into Audi, was founded during this time, and later supplied the chassis for Gottlieb Daimler's four-wheeler. On 14 November 1899, August Horch (1868–1951) established the company A. Horch & Cie. Three years later in 1902 he moved with his company to Reichenbach im Vogtland.

After troubles with Horch chief financial officer, August Horch left Motorwagenwerke and founded in Zwickau on 16 July 1909, his second company, the August Horch Automobilwerke GmbH. His former partners sued him for trademark infringement.

August Horch left the Audiwerke in 1920 for a high position at the ministry of transport, but he was still involved with Audi as a member of the board of trustees. In September 1921, Audi became the first German car manufacturer to present a production car, the Audi Type K, with left-handed drive.

In August 1928, Jørgen Rasmussen, the owner of Dampf-Kraft-Wagen (DKW), acquired the majority of shares in Audiwerke AG. In the same year, Rasmussen bought the remains of the U.S. automobile manufacturer Rickenbacker, including the manufacturing equipment for eight-cylinder engines. These engines were used in Audi Zwickau and Audi Dresden models that were launched in 1929.  In 1932, Audi merged with Horch, DKW, and Wanderer, to form Auto Union AG, Chemnitz. It was during this period that the company offered the Audi Front that became the first European car to combine a six-cylinder engine with front-wheel drive.

Before World War II, Auto Union used the four interlinked rings that make up the Audi badge today, representing these four brands. This badge was used, however, only on Auto Union racing cars in that period while the member companies used their own names and emblems.

In 1949, a new West German headquartered Auto Union was launched in Ingolstadt, Bavaria with loans from the Bavarian state government and Marshall Plan aid.

In 1958, in response to pressure from Friedrich Flick, then their largest single shareholder, Daimler-Benz took an 87% holding in the Auto Union company, and this was increased to a 100% holding in 1959. However, small two-stroke cars were not the focus of Daimler-Benz's interests, and while the early 1960s saw major investment in new Mercedes models and in a state of the art factory for Auto Union's, the company's aging model range at this time did not benefit from the economic boom of the early 1960s to the same extent as competitor manufacturers such as Volkswagen and Opel. The decision to dispose of the Auto Union business was based on its lack of profitability.

In 1964, Volkswagen acquired a 50% holding in the business, which included the new factory in Ingolstadt and the trademark rights of the Auto Union.  Initially, Volkswagen was hostile to the idea of Auto Union as a standalone entity producing its own models. Fearing that the company's heritage would disappear underneath VW badge engineering, Auto Union engineers under the leadership of Ludwig Kraus developed the first Audi 100 in secret, without Nordhoff's knowledge. When presented with a finished prototype, Nordhoff was so impressed he authorised the car for production, which when launched in 1968, went on to be a huge success.

n 1969, Auto Union merged with NSU. In the 1950s, NSU had been the world's largest manufacturer of motorcycles, but had moved on to produce small cars like the NSU Prinz, the TT and TTS versions of which are still popular as vintage race cars. NSU then focused on new rotary engines based on the ideas of Felix Wankel. In 1967, the new NSU Ro 80 was a car well ahead of its time in technical details such as aerodynamics, light weight, and safety.

The new merged company was known as Audi NSU Auto Union AG, and saw the emergence of Audi as a separate brand for the first time since the pre-war era. Volkswagen introduced the Audi brand to the United States for the 1970 model year. In 1985, with the Auto Union and NSU brands effectively dead, the company's official name was now shortened to simply Audi AG.