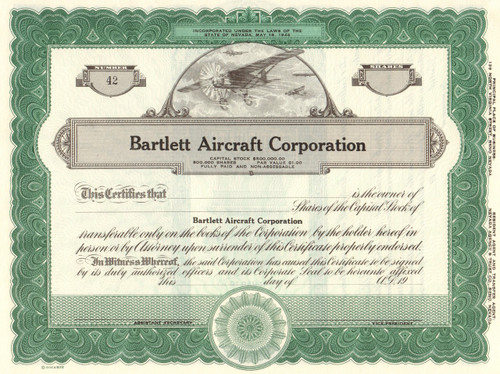 Great aircraft builder collectible.  Very nice vignette of various airplanes in the sky. Unissued and not cancelled. Dated 19__. Circa 1941 from incorporation date.

Bartlett Aircraft Corp. was a US aircraft manufacturer founded in Rosemead, California in 1941 to build light aircraft from designs acquired from the purchase of Taubman Aircraft, who in turn bought them from Babcock Airplane Co.

The Bartlett Zephyr was a United States light civil aircraft built in the 1940s. It was a mid-wing braced monoplane of conventional design with side-by-side seating for two and fixed, tail wheel undercarriage. It was originally marketed as the Babcock LC-13 by its original manufacturer, then as the Taubman LC-13 when the Babcock Airplane Corporation was acquired by Taubman Aircraft.  Immediately after the Second World War the company began production of a lightweight two-seat cabin monoplane designated the Bartlett LC13-A Zephyr 150.

It was one of the very few aircraft companies that did not profit well from the war. World War II interrupted plans for mass production and although another attempt to resume production was made at the end of hostilities.