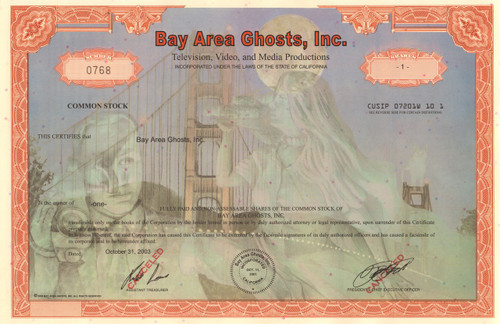 Incorporated 2001 in California., the company was listed for television, video, and media productions.  The Bay Area Ghosts documentary, also known as San Francisco Ghosts, provides an unbiased look at haunted locales ( including a haunted house ) throughout the San Francisco Bay Area where paranormal activity has occurred. It provides information on what a ghost is and where paranormal activity has been experienced at homes and businesses. A follow-up feature is now being reviewed, along with other types of productions. Included are the following locations: Queen Anne Hotel in San Francisco, Union Hotel in Benicia, U.S.S. Hornet Aircraft Carrier in Alameda, Moss Beach Distillery south of San Francisco, Rose Hill Cemetery at Black Diamond Mines near the City of Clayton