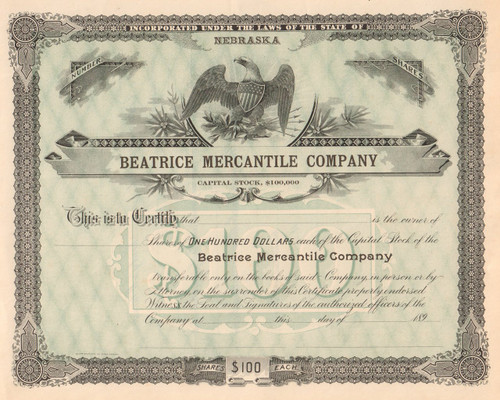 Uncommon Midwest dry goods collectible.  Nice vignette of an American Eagle with American shield. Unissued and not cancelled. Dated 189_. Circa 1895 from company records.

Beatrice NE was formed in 1857. In 1862, the U.S. Congress passed the Homestead Act, which allowed settlers to claim 160 acres of government land for a nominal fee. The law went into effect on January 1, 1863. Just after midnight on that day, Daniel Freeman persuaded a clerk to open the local Land Office so that he could file a claim for a homestead located 4 miles west of Beatrice. The Big Blue River was both a help and a hindrance to the development of Beatrice. It provided the town with a water source, and produced ample power to operate the mills that were among the town's first industries.However, it represented a major obstacle to travelers on the Oregon Trail route; and floods frequently destroyed the dams and bridges in the area. Not until 1890 was a Big Blue bridge built in Beatrice that could survive for decades.

In 1871, the Burlington and Missouri River Railroad constructed a line from Lincoln, Nebraska to Beatrice. In 1879, the Union Pacific Railroad built a line joining Beatrice to Marysville, Kansas. By 1890, the Chicago, Rock Island and Pacific Railroad had also run tracks through Beatrice.