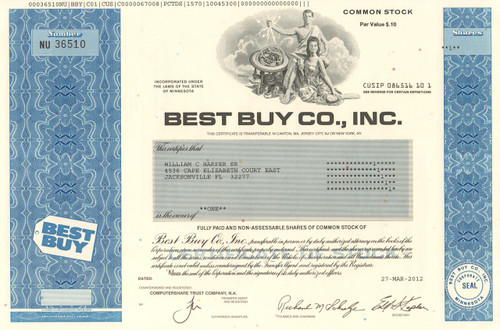 Cool retail collectible.  Very nice vignette of classical figures next to an open globe, company logo printed in the left border. Issued and not cancelled. Dated 2012.

In 1966, Richard M. Schulze and a business partner opened Sound of Music, an electronics store specializing in high fidelity stereos in Saint Paul, Minnesota. In 1967, Sound of Music acquired Kencraft Hi-Fi Company and Bergo Company. Sound of Music pulled in $1 million in revenue and made about $58,000 in profits in its first year By 1969, Schulze had bought out his business partner, Sound of Music had three stores and the company became a publicly held company listed on the NASDAQ exchange.

In 1983, with seven stores and $10 million in annual sales, Sound of Music was renamed Best Buy Company, Inc. The company also expanded its product offerings to include home appliances and VCRs, in an attempt to expand beyond its then-core customer base of 15-to-18-year-old males. Later that year Best Buy opened its first superstore in Burnsville, Minnesota. The Burnsville location featured a high-volume, low price business model, which was borrowed partially from Schulze’s successful Tornado Sale in 1981. In its first year, the Burnsville store out-performed all other Best Buy stores combined.

Best Buy debuted on the New York Stock Exchange in 1987. In 1989, the company introduced a new store concept dubbed “Concept II.” Concept II replaced dimly lit industrial-style stores with brighter and more fashionably fixtured stores. Stores also began placing all stock on the sales floor rather than in a stock room, had fewer salespersons and provided more self-help product information for its customers. Best Buy also did away with commissioned sales people. The commission-free sales environment “created a more relaxed shopping environment free of the high-pressure sales tactics used in other stores,” but was unpopular with salespersons and suppliers.