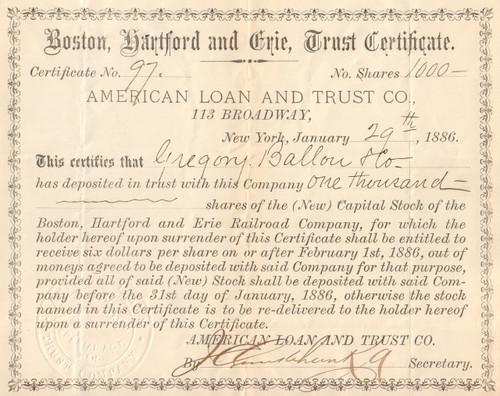 Uncommon trust certificate for share redemption at $6 each as processed by American Loan and Trust of New York.  Smaller certificate measuring 7" by 5.5".  Dated 1886.

The Boston, Hartford and Erie Railroad was chartered in May 1863 and reorganized in 1873 as the New York and New England Railroad Company.

The New York and New England Railroad was a major railroad connecting southern New York State with Hartford, Connecticut, Providence, Rhode Island, and Boston, Massachusetts. It operated from 1873 to 1893. Prior to 1873 it was known as the Boston, Hartford and Erie Railroad, which had been formed by several smaller railroads dating back to 1846.

After bankruptcy in 1893, the New York and New England Railroad was reorganized and became known as the New England Railroad before its 1898 lease to the competing New York, New Haven and Hartford Railroad. Today, most of the original New York and New England lines have been abandoned; however a portion in Massachusetts is now part of the MBTA's Franklin Line providing commuter rail service to South Station in Boston. The Connecticut Southern Railroad operates freight service on a small portion of the former NY&NE line near East Hartford and Manchester, Connecticut. Other portions in Connecticut and Rhode Island have been converted to rail trails.