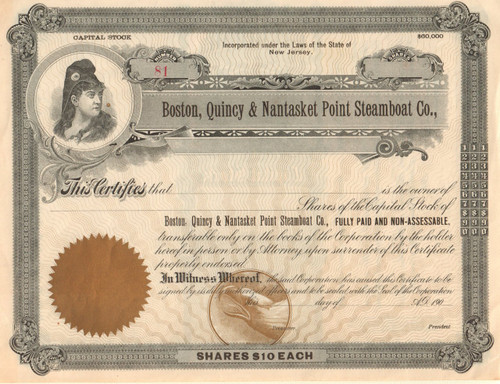 Nice vignette of Lady Liberty at the left with gold printed eagle at the bottom .  Unissued and not cancelled. Circa 1901 from issued examples.

Incorporated in 1901 in New Jersey, the company ran short steamship routes between Boston and Hull Massachusetts. The NJ charter was voided in 1905 for nonpayment of taxes. The company made daily trips to Windmill Point where there was a hotel with a nearby steamship dock and the terminus of the Nantasket Beach Railroad  The steamships also stopped in nearby Quincy Point

Nantasket Beach is a beach in the town of Hull, Massachusetts. It is part the Nantasket Beach Reservation.  The name "Nantasket" is derived from Wampanoag and means "at the strait" "low-tide place" or "where tides meet" as Hull is a peninsula. Nantasket was settled not long after Plymouth Colony and before Massachusetts Bay. Roger Conant was in the area after leaving the Plymouth Colony and before going to Cape Ann in 1625. Until Hull was incorporated in 1644, English settlers referred to the whole local region as "Nantasket Peninsula."

In 1825, Paul Warrick established "The Sportsman Hotel" on Nantasket Avenue. Later, more hotels were built and steamboats made three trips a day between Nantasket Beach and Boston in the 1840s. In 1909, an amusement area called Paragon Park was built adjacent to the beach.