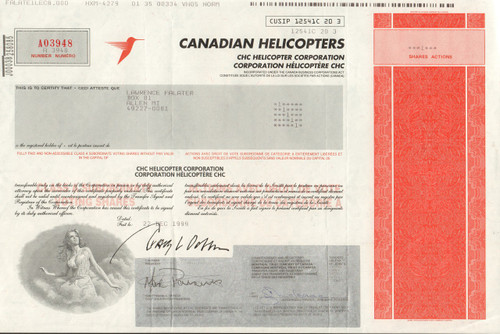 Nice hummingbird logo in red at the top and allegorical female figure among the clouds at the bottom.  Issued and not cancelled. Dated 1999. Helicopter stocks are not common and are very collectible.

Commercial helicopter flying began in British Columbia in the summer of 1947. Three ex-RCAF officers, pilots Carl Agar and Barney Bent, and engineer Alf Stringer, were operating a fixed-wing charter company, Okanagan Air Services Ltd., out of Penticton. In July 1947 they raised enough money to purchase a Bell 47-B3 and pay for their flying and maintenance training. Okanagan Air Services moved to Vancouver in 1949, was renamed Okanagan Helicopters Ltd. and, by 1954, had become the largest commercial helicopter operator in the world.