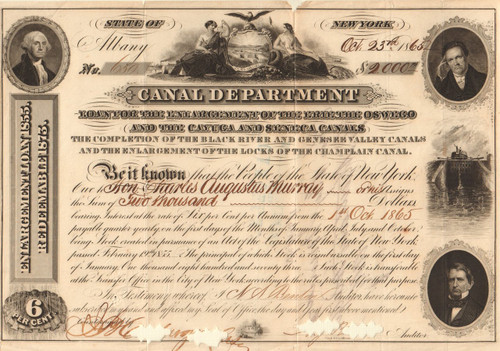 Impressive canal collectible with multiple vignettes - various US presidents, a canal lock, and the state seal of NY. Issued and cancelled through the signatures. Split in the fold at the top. Dated 1865.

Begun in 1817 and opened in its entirety 1825, the Erie Canal is considered the engineering marvel of the 19th Century. When the federal government concluded that the project was too ambitious to undertake, the State of New York took on the task of carving 363 miles of canal through the wilderness with nothing but the muscle power of men and horses.

Once derided as “Clinton’s Folly” for the Governor who lent his vision and political muscle to the project, the Erie Canal experienced unparalleled success almost overnight.  The iconic waterway established settlement patterns for most of the United States during the 19th century, made New York the financial capital of the world, provided a critical supply line which helped the North win the Civil War, and precipitated a series of social and economic changes throughout a young America.

The  New York canal system opened on October 26, 1825 when Governor Clinton set out from Buffalo in a Canal boat called the "Seneca Chief." It took the muscle power of men and horses, eight years to build the Erie Canal. Although it is considered the engineering marvel of its time, not one professional engineer was involved.

The Canal System was made up of four Canals:
~  the 338-mile Erie Canal, from Waterford to the Tonawandas
~  the 60-mile Champlain Canal, from Whitehall to Waterford
~  the 24-mile Oswego Canal, from Oswego to the Erie Canal at Three Rivers Junction
~  the 92-mile Cayuga-Seneca Canal, which encompasses both lakes of the same names and the Canal, connecting them and passing through Seneca Falls.