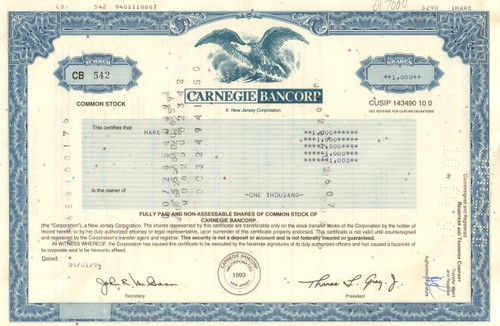 Great eagle vignette inked in the same blue as the border of the certificate. Great banking collectible.  Issued and cancelled. Dated 1994.

Incorporated in 1993 in New Jersey, the Carnegie Bancorp operated as a regional commercial bank in Mercer, Burlington, Hunterdon, Morris, and Ocean counties, New Jersey; and Bucks County, Pennsylvania.  In 1998, Carnegie Bancorp was acquired by Sovereign Bancorp Inc. On October 14, 2008, Banco Santander Central Hispano, S.A. (STD), already a 25% owner in Sovereign, announced plans to purchase the remaining 75% of the company.