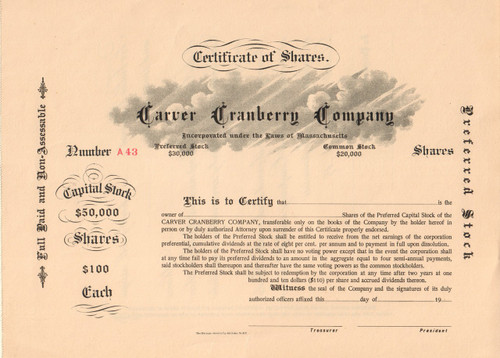 Fun stock collectible. Plain certificate with cloud under print around company name. Unissued and not cancelled.  Circa 1907 from company records.

Incorporated 1907 in Boston MA, the company later moved to Marion and ran cranberry harvesting in Carver Mass.  Carver is a town in Plymouth County, Massachusetts, United States. Carver separated from Plympton, Massachusetts, and was incorporated in 1790 because many residents lived too far away to attend church in Plympton. The town was named for John Carver, the first Governor of the Plymouth Colony. Initially agricultural, Carver was known for the iron ore from its swamp lands used to make cooking tools by the 1730s. The first iron works was "Pope's Point Furnace", built in 1732, which operated for a century by using the bogs and Sampson's Pond. Over the next 150 years, sheep shearing and lumber mills were important in Carver. As the market for iron ore declined in the latter part of the 19th century, Carver began cranberry farming as a new use for the town's swamplands. Farmers began growing cranberries in the 1870s, and by 1900 it was Carver's farmers who raised a fifth of all cranberries grown in the United States. A railroad line connected Carver to New York and Boston in 1890, further establishing the town

The cranberry, along with the blueberry and Concord grape, is one of North America's three native fruits that are commercially grown. Cranberries were first used by Native Americans, who discovered the wild berry's versatility as a food, fabric dye and healing agent. Today, cranberries are commercially grown throughout the northern part of the United States and are available in both fresh and processed forms. The name "cranberry" derives from the Pilgrim name for the fruit, "craneberry", so called because the small, pink blossoms that appear in the spring resemble the head and bill of a Sandhill crane. European settlers adopted the Native American uses for the fruit and found the berry a valuable bartering tool.

American whalers and mariners carried cranberries on their voyages to prevent scurvy. In 1816, Captain Henry Hall became the first to successfully cultivate cranberries. By 1871, the first association of cranberry growers in the United States had formed, and now, U.S. farmers harvest approximately 40,000 acres of cranberries each year.

The cranberry helped sustain Americans for hundreds of years. Native Americans used cranberries in a variety of foods, the most popular was pemmican - a high protein combination of crushed cranberries, dried deer meat and melted fat - they also used it as a medicine to treat arrow wounds and as a dye for rugs and blankets. Cultivation of the cranberry began around 1816, shortly after Captain Henry Hall, of Dennis, Massachusetts, noticed that the wild cranberries in his bogs grew better when sand blew over them. Captain Hall began transplanting his cranberry vines, fencing them in, and spreading sand on them himself. When others heard of Hall's technique, it was quickly copied. Continuing throughout the 19th century, the number of growers increased steadily. Normally, growers do not have to replant since an undamaged cranberry vine will survive indefinitely. Some vines in Massachusetts are more than 150 years old.