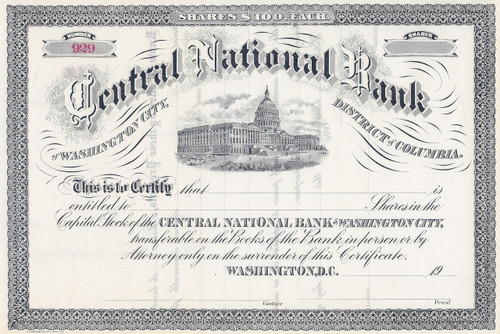 Great District of Columbia (DC) bank cert. Beautiful black and white piece with the Capitol as the central vignette.  Unissued. Dated 19__, Circa 1900 based on company records.

Built as the St. Marc Hotel in 1860. In 1887 the Central National Bank assumed ownership of the hotel and commissioned architect Alfred B. Mullett to design the addition on the west facade. The addition included the two corner towers.

The ST. MARC HOTEL was established in 1855 by John H. Semmes. It became one of the foremost hotels in Washington. Under Semmes' proprietorship, rooms at the ST. MARC rented for $1-$2 per night for a single room and $2-$3 for a double room. H. C. Bowers secured a lease from Semmes in 1879 after which he completely remodeled and refurnished the building. John F. Fitzgerald became the proprietor of the hotel in 1885 and remained with it until the building was purchased by The Central National Bank in 1887. A commercial guide to Washington published in 1887 noted the ST. MARC's "...elegant apportionments, fine cuisine, and unsurpassed location, being in close proximity to several lines of streetcars and the center of the business part of the city."

The Central National Bank was the primary tenant of the building, which is generally referred to by this name, from 1887-1907. The Central National Bank was organized as a national bank on April 11, 1878. For several years, it occupied the Bank of Washington building, 322 C Street, N.W., before purchasing the ST. MARC HOTEL building at the apex of Pennsylvania Avenue and C Street on July 1, 1887. The bank occupied the ground floor of the building and had its vaults in the basement and on the second floor. The upper floors were rented to brokers, lawyers, insurance and real estate agents, a printer, publisher, artist and notary public. The "Central National Bank", under its first president, Samuel Norment, engaged Alfred B. Mullett to give the building a unique image. The west facade and two towers were added to accomplish this end. James L. Barbour, one of the previous owners of the building, became the first vice-president of the newly formed bank.

After the bank's departure from the building, the lower floor corner (west) room was rented to a series of cigar stores. The space defined as 633 Pennsylvania Avenue was rented to a men's furnishing and clothiers store, Greenberg & Kuntz. Jacob Melvikov Men's Furnishings followed Greenberg & Kuntz in the space. The upper floors remained professional offices. The Apex Liquor Store began occupying the ground floor of the building in 1945. Two lawyers leased space on the second floor of the building until 1970. The Apex Liquor Store now has additional office space in one of the rooms on the second floor. The third through sixth floors of the building have remained vacant since 1950.

After weathering the long decline of downtown Washington, the Apex Building was renovated in 1984 by Sears, Roebuck, and Co., as headquarters for its Sears World Trade arm. Sears added a story on top of the building but otherwise generally restored the exterior to its original appearance, with the exception that they decided to paint the brownstone an odd mocha color that it still retains today. Sears stayed in the building for less than a decade, and now it is the headquarters of the National Council of Negro Women, Inc.