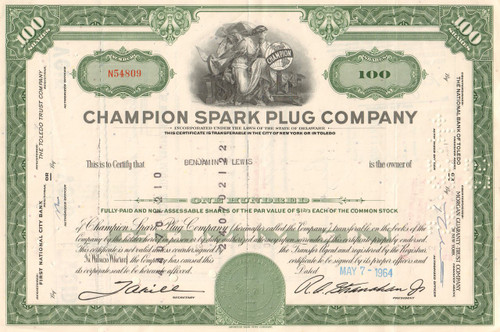 Albert Champion was a Frenchman who immigrated to the United States in 1889 to race bicycles and motorcycles. He also set up a side business, manufacturing and selling spark plugs in Boston, Massachusetts, as a means of income. William Durant, the founder of General Motors in the USA, spotted Champion’s potential and moved him and his operation to Flint, Michigan, in 1904. The Champion Ignition Company was formed.

Over the next few years, Champion lost control of the company to the Stranahans (his partners), he left and subsequently setup the AC spark plug company in 1908. GM’s production of motor vehicles grew significantly and GM Corp purchased the AC spark plug company in 1909 to service their ever increasing needs. Champion's first company sued his second company for trademark infringement, and in a settlement reached in 1922 his second company was re-named for Champion's initials, AC Spark Plug Company (now AC Delco). Both companies remained leaders in spark plug sales

Champion was founded by Robert A. Stranahan and Frank D. Stranahan (developing  Albert Champion's side business) in 1908 in Boston and then moved to Toledo, Ohio in 1910 to be close to the Willys-Overland Auto Company. In 1989, Champion was purchased by Cooper Industries and is now a wholly owned brand of Federal-Mogul Corporation as of 1998. Champion Spark Plug Co. once had 3,500 workers in Toledo. The company’s last Toledo factory closed in 1991.