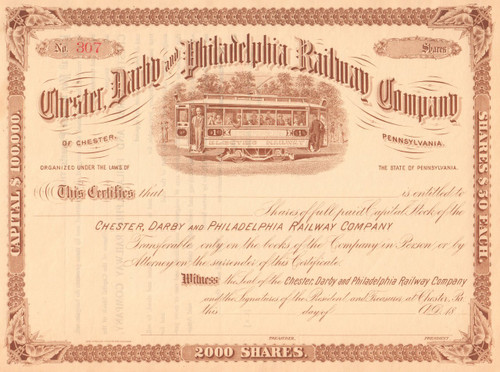 Rare streetcar collectible stock certificate with a great trolley vignette.  Unissued and not cancelled. Circa 1856 from issued examples. Dated 18__ on the certificate. Unusual single print color in brown.

Incorporated 1892 in Chester PA, Chester Darby & Philadelphia Railway was leased 1893 to Union Railway Co. of Chester and then leased 1910 to Southern Pennsylvania Traction Co.  The company was operated by the Chester Traction Company which had a alrge shareholder status. the business got its electric power from the Union station (owned by the Union Railway).  The company's Darby Station is still in use today by SEPTA (Southeastern Pennsylvania Transportation Authority) but is nothing more than a shelter.