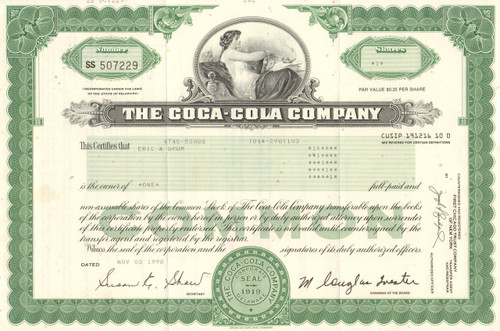 Fun soda collectible. Classic vignette of a reclined female with a book and oil lamp.  Issued and not cancelled. Dated 1996-2012.

Coca-Cola is a carbonated soft drink produced by The Coca-Cola Company of Atlanta, Georgia, and is often referred to simply as Coke (a registered trademark of The Coca-Cola Company in the United States since March 27, 1944). Originally intended as a patent medicine when it was invented in the late 19th century by John Pemberton, Coca-Cola was bought out by businessman Asa Griggs Candler, whose marketing tactics led Coke to its dominance of the world soft-drink market throughout the 20th century. The name refers to two of its original ingredients: kola nuts, a source of caffeine, and coca leaves. The current formula of Coca-Cola remains a trade secret, although a variety of reported recipes and experimental recreations have been published. The company produces concentrate, which is then sold to licensed Coca-Cola bottlers throughout the world. The bottlers, who hold exclusive territory contracts with the company, produce finished product in cans and bottles from the concentrate in combination with filtered water and sweeteners.

Confederate Colonel John Pemberton who was wounded in the American Civil War, became addicted to morphine, and began a quest to find a substitute for the dangerous opiate. The prototype Coca-Cola recipe was formulated at Pemberton's Eagle Drug and Chemical House, a drugstore in Columbus, Georgia, originally as a coca wine. In 1885, Pemberton registered his French Wine Coca nerve tonic. In 1886, when Atlanta and Fulton County passed prohibition legislation, Pemberton responded by developing Coca-Cola, essentially a nonalcoholic version of French Wine Coca. The first sales were at Jacob's Pharmacy in Atlanta, Georgia, on May 8, 1886.

By 1888, three versions of Coca-Cola – sold by three separate businesses – were on the market. A co-partnership had been formed on January 14, 1888 between Pemberton and four Atlanta businessmen: J.C. Mayfield, A.O. Murphey; C.O. Mullahy and E.H. Bloodworth. Not codified by any signed document, a verbal statement given by Asa Candler years later asserted under testimony that he had acquired a stake in Pemberton's company as early as 1887. John Pemberton declared that the name "Coca-Cola" belonged to his son, Charley, but the other two manufacturers could continue to use the formula.

Charley Pemberton's record of control over the "Coca-Cola" name was the underlying factor that allowed for him to participate as a major shareholder in the March 1888 Coca-Cola Company incorporation filing made in his father's place.

The deal was actually between John Pemberton's son Charley and Walker, Candler & Co. – with John Pemberton acting as cosigner for his son. For $50 down and $500 in 30 days, Walker, Candler & Co. obtained all of the one-third interest in the Coca-Cola Company that Charley held, all while Charley still held on to the name. After the April 14 deal, on April 17, 1888, one-half of the Walker/Dozier interest shares were acquired by Candler.

In 1892, Candler set out to incorporate a second company; "The Coca-Cola Company" (the current corporation). When Candler had the earliest records of the "Coca-Cola Company" burned in 1910, the action was claimed to have been made during a move to new corporation offices around this time. After Candler had gained a better foothold on Coca-Cola in April 1888, he nevertheless was forced to sell the beverage he produced with the recipe he had under the names "Yum Yum" and "Koke".

The first bottling of Coca-Cola occurred in Vicksburg, Mississippi, at the Biedenharn Candy Company in 1891. The proprietor of the bottling works was Joseph A. Biedenharn. The original bottles were Biedenharn bottles, very different from the much later hobble-skirt design of 1915 now so familiar.

It was then a few years later that two entrepreneurs from Chattanooga, Tennessee proposed the idea of bottling and were so persuasive that Candler signed a contract giving them control of the procedure for only one dollar. Candler never collected his dollar, but in 1899, Chattanooga became the site of the first Coca-Cola bottling company. Candler remained very content just selling his company's syrup. The loosely termed contract proved to be problematic for The Coca-Cola Company for decades to come. This contract specified that bottles would be sold at 5¢ each and had no fixed duration, leading to the fixed price of Coca-Cola from 1886 to 1959.