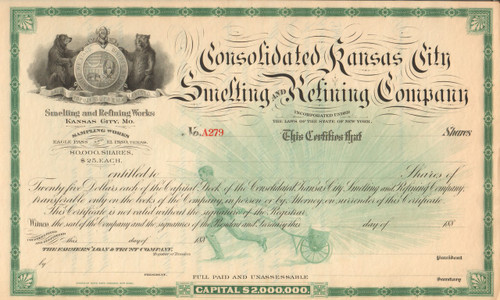 Stunning collectible piece.  Very nice top left vignette of an artist's interpretation of the Missouri state seal.  Beautiful green under print of a man pulling a smelter's cart.  Unissued and not cancelled. Dated 188_. Circa 1880 from incorporation date. This is the earliest certificate version from this company.

The Kansas City Smelting and Refining Company began operations in 1880 in Argentine, Kansas. Its business was refining ores: Zinc, pig lead and bullions -- gold and silver. The ores originated in Mexico and Colorado. Fire destroyed most of the works on Dec. 2, 1886. The works were rebuilt immediately. The company also operated pants in Kansas City, and Eagle Pass and El Paso TX.

The new company was known for a building a smoke stack at the Argentine smelter around 1900 on the north side of Metropolitan near 21st Street, replacing the one on a hill to the south. The smoke stack reportedly, the largest in the world at the time, “had a height of 187 1/2 feet, was 26 feet square at the base, 15 feet across at the top, contained 700,000 bricks and cost $20,000.00 to build." The stack was built tall to carry the fumes to the currents of air above the hills.