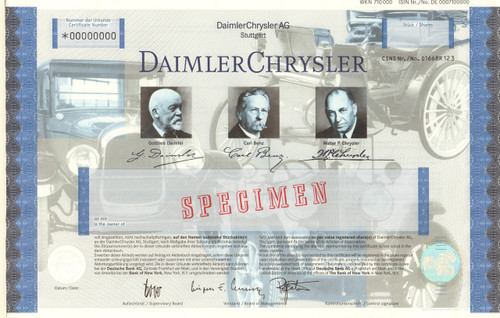 Cool auto stock with a vignette of the three (initial) founders - Daimler, Benz, and Chrysler.  Specimen (sample) stock issuance for the company name change.  Colorful under printing of antique automobiles.

Daimler AG is a German manufacturer of automobiles, motor vehicles, and engines, which dates back more than a century.  An Agreement of Mutual Interest was signed on 1 May 1924 between Benz & Cie (founded 1883 by Karl Benz) and Daimler Motoren Gesellschaft (founded 1890 by Gottlieb Daimler and Wilhelm Maybach).

Both companies continued to manufacture their separate automobile and internal combustion engine brands until, on 28 June 1926, when Benz & Cie. and Daimler Motoren Gesellschaft AG formally merged—becoming Daimler-Benz AG—and agreed that, thereafter, all of the factories would use the brand name of Mercedes-Benz on their automobiles.

In 1998, Daimler-Benz and Chrysler Corporation announced the world's largest cross-border deal ever, valued at $38billion, and the resulting change in company name to "DaimlerChrysler AG".

In 2007, when the Chrysler group was sold off to Cerberus Capital Management , the name[note 1] of the parent company was changed to simply "Daimler AG".  In November 2014, Daimler announced it would acquire 25 percent of Italian motorcycle producer MV Agusta for an undisclosed fee.

In a so-called "Merger of Equals," or "Marriage made in Heaven", according to its then CEO and architect Jürgen E. Schrempp,[6] Daimler-Benz AG and United States-based automobile manufacturer Chrysler Corporation, the third-largest American automaker, merged in 1998 in an exchange of shares as Daimler-Benz AG bought 92% of Chrysler, and 8% of Chrysler remained independent and formed DaimlerChrysler AG. The terms of the merger allowed Daimler-Benz's non-automotive businesses such as Daimler-Benz InterServices AG, "debis AG" for short, to continue to pursue their respective strategies of expansion. debis AG reported revenues of $8.6 bn in 1997.

The merger was contentious with investors launching lawsuits over whether the transaction was the 'merger of equals' that senior management claimed or actually amounted to a Daimler-Benz takeover of Chrysler. A class action investor lawsuit was settled in August 2003 for US$300 million while a suit by billionaire investor activist Kirk Kerkorian was dismissed on 7 April 2005. The transaction claimed the job of its architect, Chairman Jürgen E. Schrempp, who resigned at the end of 2005 in response to the fall of the company's share price following the transaction. The merger was also the subject of a book Taken for a Ride: How Daimler-Benz Drove Off With Chrysler, (2000) by Bill Vlasic and Bradley A. Stertz.

Another issue of contention is whether the merger delivered promised synergies and successfully integrated the two businesses. Martin H. Wiggers' concept of a platform strategy like the VW Group, was implemented only for a few models, so the synergy effects in development and production were too low. As late as 2002, DaimlerChrysler appeared to run two independent product lines. Later that year, the company launched products that appeared to integrate elements from both sides of the company, including the Chrysler Crossfire, which was based on the Mercedes SLK platform and utilized Mercedes's 3.2L V6, and the Dodge Sprinter/Freightliner Sprinter, a re-badged Mercedes-Benz Sprinter van.

Daimler agreed to sell the Chrysler unit to Cerberus Capital Management in May 2007 for US$6 billion. Through most of its history, Chrysler has been the third largest of the "Big 3" U.S. automakers, but in January 2007, DaimlerChrysler, excluding its luxury Mercedes and Maybach lines, also outsold traditionally second place Ford, though behind General Motors and Toyota.

Chrysler reported losses of US$1.5 billion in 2006. It then announced plans to lay off 13,000 employees in mid-February 2007, close a major assembly plant and reduce production at other plants in order to restore profitability by 2008.