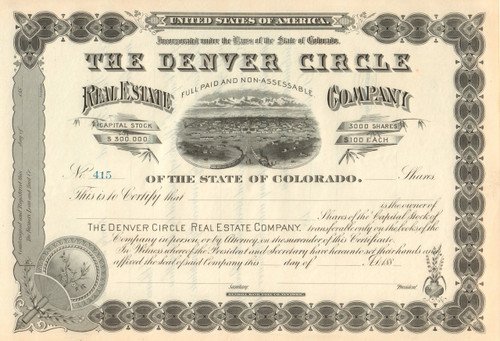 Very nice stock with an amazing vignette of Denver, Colorado with trains in the foreground and the mountains in the background.  Unissued and not cancelled. Dated 1880's. Certificate printed 188_.

Incorporated in 1881 to procure, develop, and manage land alongside the Denver Circle Railroad (1881-1898). The railroad became part of the Atchison Topeka and Santa Fe company.

William H. Loveland, Colorado pioneer and entrepreneur, started the Circle Railroad in 1881. This narrow-gauge, coal-fired, steam-powered railroad was known as “the rowdiest railroad of any kind in the Denver area.” Designed as a combination beltway railroad and a rapid transit, it was to encircle the metropolitan city.

The idea to introduce a circular steam line came from William A. H. Loveland, and his Denver Circle Railroad was a unique endeavor in a couple ways: with steam powered engines, it would instantaneously expand the commutable distance for residential development and offer inter-city freight delivery with tracks that circled the city. Mr. Loveland had previously created the Colorado Central Railroad Co before losing control of it to the Union Pacific. And, fortunately for Denver, his political efforts to anoint Golden as the state capitol were unsuccessful. After losing a race for the governorship to Pitkin in 1877, he returned to the business of rail. A franchise was granted by the city in January 1881.

Like many of his contemporaries, Loveland’s plans for “improving” Denver were motivated by real estate development opportunity along its route. In conjunction with the railroad company, Loveland and his partners incorporated a construction company, the Denver Circle Railroad Real Estate Company, and The National Mining and Industrial Exposition. It is fair to suggest that the once largely vacant land from today’s West Wash Park southwest to Overland Park was first made viable for development by the Denver Circle line.