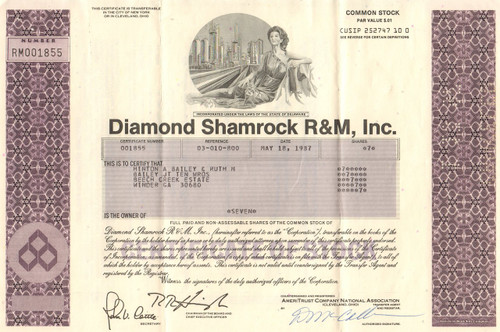 Great piece from the oil industry. Nice vignette of reclining female figure in front of an oil refinery scene.   Issued and cancelled. Dated in the 1980s and 1990s.

In 1985 the company had a $604.7 million loss. It restructured itself in the year before December 1986. On Wednesday December 3, 1986 T. Boone Pickens offered to buy Diamond Shamrock for $2 billion. Kit Freiden of the Associated Press stated "some analysts predicted the giant energy company would reject the offer."

In 1988 the company's annual refinery sales were $1.8 billion. Diamond Shamrock owned and operated 529 stores. 423 of them were in Texas, with 94 of them in Greater Houston. The company owned an additional 64 stores in Colorado. In 1988 the company bought from investor F. Philip Handy 80 Tenneco gasoline stations, with 30 of them in Houston. According to the plans, the Tenneco stores would be rebranded as Diamond Shamrocks.

In 1995 Diamond Shamrock had 2,000 stores, with most of them in Texas, Colorado, New Mexico, and Louisiana. Of them, over 170 stores were in Houston. That year, Diamond Shamrock bought the National Convenience Stores Stop N Go chain for $260 million. The plans called for the combined company to be headquartered in San Antonio. The combined company was to have two refineries in Texas, 11,000 employees, and 2,600 stores.

The earliest predecessor to Diamond Shamrock is Diamond Alkali Company, which was founded in 1910 by a group of Pittsburgh businessmen in the glass industry. The company was formed to produce soda ash, a basic raw material of glass manufacturing. Diamond Alkali was incorporated that same year in West Virginia.

World War I brought about a high demand for canning glass, and the company found a niche in that market. Around that time, the company also began marketing its soda ash for laundry preparations, baking soda, water softeners, paper and pulp production solutions, and textile processing. By 1915 Diamond Alkali's production of soda ash exceeded demand for the product. The company began to use soda ash and limestone to produce caustic soda, thus opening new markets in lye, soap, detergents, rayon, and cellophane. Three years later, the company began making bicarbonate of soda. Soon thereafter, the company's product line was expanded beyond the basic alkalis of soda ash, caustic soda, and bicarbonate. To this end, the company began manufacturing calcium carbonates, cement, and coke in 1925. A sludge by-product of soda ash was treated to make the calcium carbonate, marketed as an agent to give paint smoothness, speed dry printers' inks, and add physical properties to rubber and plastic products. In 1929 Diamond Alkali began making caustic soda through the new process of electrolysis of salt, a method of running brine through electricity. Two by-products were formed from this process, chlorine and pure hydrogen, which were also marketed. The chlorine was used by the water purification industry and also in the manufacture of dry cleaning solvents. The hydrogen was used for hydrochloric acid production, welding fuel, food oil hardening, electric lamp production, and ammonia production.

In 1936 the company began producing magnesium oxide, which proved to be an important component for incendiary bombs used in World War II. Diamond Alkali was chosen by the U. S. government to operate one of the twelve government-owned magnesium plants. By 1944 the company was operating three plants constructed through Defense Plant Corporation funds, including the magnesium plant, a calcium hypochlorite plant, and a synthetic catalyst plant. Around that time the company acquired Emeryville Chemical Company, a West Coast manufacturer of silicate of soda. At the end of the war, Diamond focused on restructuring the company and selling unprofitable assets.

The company opened several new plants during the end of the 1940s. In 1948 sales surpassed $50 million for the first time. At the end of the decade, Diamond acquired the Martin Dennis Company. This purchase increased the company's bichromate production, and allowed Diamond to form an export sales division.

By 1950 the company was operating twelve plants producing over 100 different chemicals. The Korean War increased demand for the company's products during the middle of the decade. Diamond Alkali implemented programs for diversification, geographical expansion, and modernization during the 1950s. As a result, the company became involved in the organic and agricultural chemicals, plastics, and chromic acid fields. In 1950 the company acquired the chromic acid business from E.I. du Pont de Nemours and Company. A year later the company acquired Kolker Chemical Works, Inc., a manufacturer and distributor of organic insecticides and agricultural chemicals, including DDT. In 1953 Diamond began producing polyvinyl chloride, used in the manufacture of plastic articles, and perchlorethylene, used in metal cleaning and dry cleaning. Also in 1953, the company acquired Belle Alkali Company, a producer of chemicals used in the manufacture of silicone resins, solvents, and drugs. In 1955 Diamond acquired a 51 percent interest in Diamond Black Leaf Company, which operated plants in Virginia, Alabama, Kentucky, and Texas. That same year, the company surpassed $100 million in sales. Two years later, Diamond Black Leaf became a wholly owned subsidiary of Diamond Alkali.

In the early 1970s the company focused its oil exploration on the Gulf of Mexico, Gulf of Alaska, North Sea, and Texas Panhandle. The company's growing interest in the animal-health and veterinary medicine fields led to Diamond's 1971 purchase of Bio-Toxicological Research Laboratories. The next year Diamond purchased American Chocolate & Citrus Company of St. Louis, a commercial dairy provider of flavorings, fruit drink bases, and food processes. Also in this decade, the company expanded its interest in the commercial baking supply market, acquiring Federal Yeast Corporation, Gold Star Foods Company, and Bakery Products, Inc. Diamond also bought the animal-health business of Shell Chemical Company, and continued to expand its oil and gas interests.