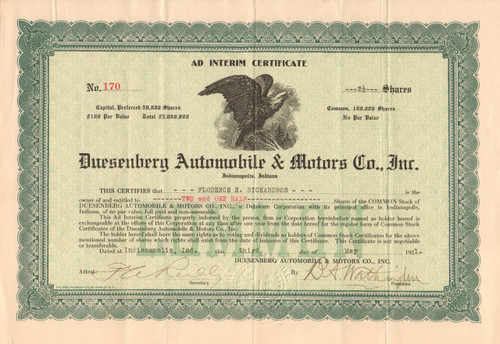 Very hard to find Duesenberg interim stock certificate dated may 3, 1921. Very nice eagle vignette against green background and border.Printed signature of B. A. Worthington as president.

Duesenberg Motors Company (sometimes referred to as "Duesy") was an American manufacturer of race cars and luxury automobiles. It was founded by brothers August and Frederick Duesenberg in 1913 in Saint Paul, Minnesota, where they built engines and race cars.[1] The brothers moved their operations to Elizabeth, New Jersey in 1916 to manufacture engines for World War I. In 1919, when their government contracts were cancelled, they moved to Indianapolis, Indiana, home of the Indianapolis Motor Speedway, and established the Duesenberg Automobile and Motors Company, Inc. (Delaware). In late 1926, E.L. Cord added Duesenberg to his Auburn Automobile Company. With the market for expensive luxury cars severely undercut by the Depression, Duesenberg folded in 1937.

In 1913, brothers Fred and Augie Duesenberg founded Duesenberg Motors Company, Inc. on University Avenue in St. Paul, Minnesota, to build engines and race cars. The brothers were self-taught engineers and built many experimental cars. Duesenberg cars were considered some of the best cars of the time, and were built entirely by hand. In 1914, Eddie Rickenbacker drove a "Duesy" to finish in 10th place at the Indianapolis 500, and Duesenberg won the race in 1924, 1925, and 1927. In 1921, Duesenberg provided the pace car for the Indy 500, driven by Fred Duesenberg. Also in 1921, Jimmy Murphy became the first American to win the French Grand Prix when he drove a Duesenberg to victory at Le Mans.

At the end of World War I, they ceased building aviation and marine engines in Elizabeth, New Jersey at the corner of Newark Avenue and North Avenue. In 1919 the Duesenberg brothers sold their Minnesota and New Jersey factories to John Willys and moved to a new headquarters and factory in Indianapolis, where the "Duesenberg Automobile and Motors Company, Inc." was established in 1920 to begin production of passenger cars. The plant was located on a 17-acre site on West Washington street at Harding street until 1937, adjacent to the Overland Automobile factory.

E.L. Cord bought the company on October 26, 1925, for the brothers' engineering skills, talent and the brand name in order to produce luxury cars. He challenged Fred Duesenberg to design an automobile that would be the best in the world. Indeed, Cord wanted the biggest, fastest, and most expensive car ever made. He also ordered a large chassis to be able to compete with the biggest, most powerful, and most luxurious European cars of the era, such as Hispano-Suiza, Isotta Fraschini, Mercedes-Benz, and Rolls-Royce.

After Cord's takeover, the new company was renamed "Duesenberg, Inc." Fred would continue in the new organization, now with the title of vice president in charge of engineering and experimental work. Whereas Augie had played an important role in the development of the Model A and its variant, the very rare X, he had nothing to do with the J and had no formal connection with Duesenberg, Inc. until later. According to the expert Marshall Merkes, "Cord did not want Augie around." However, all Duesenberg racing cars produced after 1926 were Augie-built in an enterprise that functioned separately, and in a building apart from the main Duesenberg plant. He was also responsible for a number of engineering achievements like the superchargers he developed for both the Auburn and Cord motorcars.