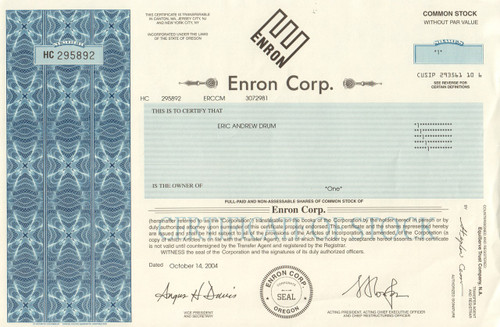 Uncommon version that is not oftern seen.  Great vignette on this cert of the Enron crooked E company logo.  This certificate represents a significant piece of financial history and scandal.  Issued and not cancelled. Dated 2004.

Enron Corporation was an American energy, commodities, and services company based in Houston, Texas. Before its bankruptcy on December 2, 2001, Enron employed approximately 20,000 staff and was one of the world's major electricity, natural gas, communications, and pulp and paper companies, with claimed revenues of nearly $111 billion during 2000. Fortune named Enron "America's Most Innovative Company" for six consecutive years.

At the end of 2001, it was revealed that its reported financial condition was sustained substantially by an institutionalized, systematic, and creatively planned accounting fraud, known since as the Enron scandal. Enron has since become a well-known example of willful corporate fraud and corruption. The scandal also brought into question the accounting practices and activities of many corporations in the United States and was a factor in the creation of the Sarbanes–Oxley Act of 2002. The scandal also affected the greater business world by causing the dissolution of the Arthur Andersen accounting firm.

Enron filed for bankruptcy in the Southern District of New York during late 2001 and selected Weil, Gotshal & Manges as its bankruptcy counsel. It ended its bankruptcy during November 2004, pursuant to a court-approved plan of reorganization, after one of the most complex bankruptcy cases in U.S. history. A new board of directors changed the name of Enron to Enron Creditors Recovery Corp., and emphasized reorganizing and liquidating certain operations and assets of the pre-bankruptcy Enron. On September 7, 2006, Enron sold Prisma Energy International Inc., its last remaining business, to Ashmore Energy International Ltd. (now AEI).

Enron's predecessor was the Northern Natural Gas Company, which was formed in 1932, in Omaha, Nebraska. It was reorganized in 1979 as the main subsidiary of a holding company, InterNorth which was a diversified energy and energy related products company. InterNorth was a major business for natural gas production, transmission and marketing as well as for natural gas liquids and was an innovator in the plastics industry.

The company initially named itself "HNG/InterNorth Inc.", even though InterNorth was the nominal parent. It built a large and lavish headquarters complex with pink granite in Omaha (dubbed locally as the "Pink Palace"), that was later sold to Physicians Mutual corporation. However, the departure of ex-InterNorth and first CEO of Enron Corp Samuel Segnar six months after the merger allowed former HNG CEO Kenneth Lay to become the next CEO of the newly merged company. Lay soon relocated the company's headquarters to Houston (after promising to keep it in Omaha) and began to change the business. Lay and his secretary, Nancy McNeil, originally selected the name "Enteron" (possibly spelled in "upper camelcase" as "EnterOn"), but, when informed that the term approximated a Greek word referring to the intestines, the name was quickly abbreviated to Enron. The final name was decided upon only after business cards, stationery, and other items had been printed reading "Enteron". Enron's "crooked E" logo was designed during the mid-1990s by the American graphic designer Paul Rand. Rand's original design included one of the elements of the E in yellow which disappeared when copied or faxed. This was quickly replaced by a green element. Almost immediately after the relocation to Houston, Enron began selling major assets such as its chemicals division Northern PetroChemicals, accepted silent partners in Enron CoGeneration, Northern Border Pipeline and Transwestern Pipeline, and became a less diversified company. Early financial analysts said Enron was accumulating great debt and the sale of major operations would not solve the problem.

In 1990, Enron's Chief Operating Officer Jeffrey Skilling hired Andrew Fastow, who was well acquainted with the burgeoning deregulated energy market that Skilling wanted to exploit. In 1993, Fastow began establishing numerous limited liability special purpose entities (a common business practice in the energy sector); however, it also allowed Enron to transfer liability so that it would not appear in its accounts, allowing it to maintain a robust and generally increasing stock price and thus keeping its critical investment grade credit ratings.

Enron was originally involved in transmitting and distributing electricity and natural gas throughout the United States. The company developed, built, and operated power plants and pipelines while dealing with rules of law and other infrastructures worldwide. Enron owned a large network of natural gas pipelines, which stretched ocean to ocean and border to border including Northern Natural Gas, Florida Gas Transmission, Transwestern Pipeline company and a partnership in Northern Border Pipeline from Canada. The states of California, New Hampshire and Rhode Island had already passed power deregulation laws by July 1996, the time of Enron's proposal to acquire Portland General Electric corporation.

During 1998, Enron began operations in the water sector, creating the Azurix Corporation, which it part-floated on the New York Stock Exchange during June 1999. Azurix failed to become successful in the water utility market, and one of its major concessions, in Buenos Aires, was a large-scale money-loser. After the relocation to Houston, many analysts criticized the Enron management as being greatly in debt. The Enron management pursued aggressive retribution against its critics, setting the pattern for dealing with accountants, lawyers, and the financial media.

Enron grew wealthy due largely to marketing, promoting power, and its high stock price. Enron was named "America's Most Innovative Company" by the magazine Fortune for six consecutive years, from 1996 to 2001. It was on the Fortune‍ '​s "100 Best Companies to Work for in America" list during 2000, and had offices that were stunning in their opulence. Enron was hailed by many, including labor and the workforce, as an overall great company, praised for its large long-term pensions, benefits for its workers and extremely effective management until the exposure of its corporate fraud. The first analyst to question the company's success story was Daniel Scotto, an energy market expert at BNP Paribas, who issued a note in August 2001 entitled Enron: All stressed up and no place to go, which encouraged investors to sell Enron stocks, although he only changed his recommendation on the stock from "buy" to "neutral".

As was later discovered, many of Enron's recorded assets and profits were inflated or even wholly fraudulent and nonexistent. One example of fraudulent records was during 1999 when Enron promised to repay Merrill Lynch & Co.'s investment with interest in order to show profit on its books. Debts and losses were put into entities formed "offshore" that were not included in the company's financial statements, and other sophisticated and arcane financial transactions between Enron and related companies were used to eliminate unprofitable entities from the company's books.

Its most valuable asset and the largest source of honest income, the 1930s-era Northern Natural Gas company, was eventually purchased by a group of Omaha investors, who relocated its headquarters back to Omaha; it is now a unit of Warren Buffett's Berkshire Hathaway Energy. NNG was established as collateral for a $2.5 billion capital infusion by Dynegy Corporation when Dynegy was planning to buy Enron. When Dynegy examined Enron's financial records carefully, they repudiated the deal and dismissed their CEO, Chuck Watson. The new chairman and CEO, the late Daniel Dienstbier, had been president of NNG and an Enron executive at one time and was forced out of Enron by Ken Lay. Dienstbier was an acquaintance of Warren Buffett. NNG continues to be profitable now.