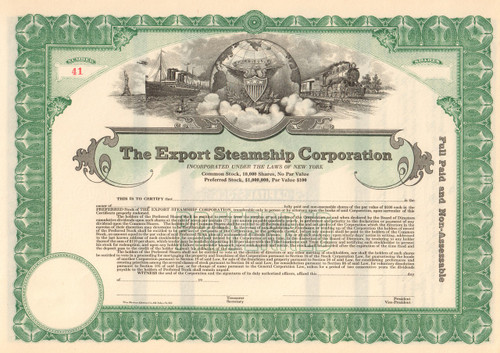 Great steamship line piece.  Amazing vignette of US seal on a globe flanked by a steamship in New York harbor and a steam train racing an early automobile. Unissued and not cancelled. Dated 19__. Circa 1920's from issued examples.

The Export Steamship Corporation Inc. was founded in January 1919 under the laws of the State of New York. The first Export transatlantic sailing was undertaken by the 3,274 ton chartered freighter Millinocket, which left New York on 16 May 1919 for Antwerp. The Export Steamship Corporation is often regarded as having run exclusively between the USA and the Mediterranean but, in fact, its first few sailings were all to Northern Europe. The first Mediterranean voyage was taken by the Lake Festina, a brand new ship built at Toledo, Ohio, hence her sailing on 26 July from Montreal for Gibraltar, Piraeus and the Black Sea.

Henry Herbermann, president of the line, announced on 3 August 1928 that for the sake of uniformity it had been decided to give all the ships names bearing the prefix Ex. The first to be renamed were The Lambs, which became the Exporter, and the Hog island, which became the Express. In accordance with the Merchant Marine Act of 1928, the Company was simultaneously awarded a ten year mail contract at increased remuneration.

In March 1934 the United States Commerce Department demanded a complete reorganisation of the Export Steamship Corporation, the first step being the resignation of Henry Herbermann from the presidency. A year later, the New York Shipbuilding Corporation, holders of a controlling interest in the Company, sold this interest to a syndicate which included Lehman Brothers and Thomas L. Chadbourne. Finally, a new company,American Export Lines Inc. was formed in August 1936.

In April 1946 American Export announced their first post-war schedule of passenger sailings to Mediterranean ports by the motorship Vulcania, built in 1927 for the Cosulich Line and later incorporated into Italia, and the C-4 type vessels Marine Shark and Marine Carp. The Vulcania was, in fact, already engaged in her first commercial voyage for the Company, her sixth and last ending at New York on 1 November 1946. A fortnight later, she and her sister ship, the Saturnia, which had been laid up at New York for several months, were handed back to Italy. Subsequent sailings were under the auspices of Italia, who appointed American Export as their American agents.

The Independence and Constitution, named after two of the American Navy's most famous sailing ships of the war of 1812, were built by the Bethlehem Shipbuilding Corporation at Quincy, Massachusetts. They were twin-screw ships propelled by double-reduction geared turbines at a service speed of 23 knots, and could accommodate 295 first class, 375 cabin and 330 tourist passengers.

The American Export Lines were acquired on 28 March 1978 by Farrell Lines Inc of New York, a line dating back to 1926 and running services from East and Gulf Coasts of the USA to West, South and East Africa and to Australia and New Zealand. And from North Pacific Coast ports to Australia, New Zealand and the South Pacific. As a result, Farrell Lines became the largest privately-owned shipping company in the United States. The name American Export Lines has largely been dropped from advertisements, but the description American Export Service is retained in connection with Farrell services from East Coast ports of the USA to the Mediterranean, to the United Kingdom and to Northern Europe.