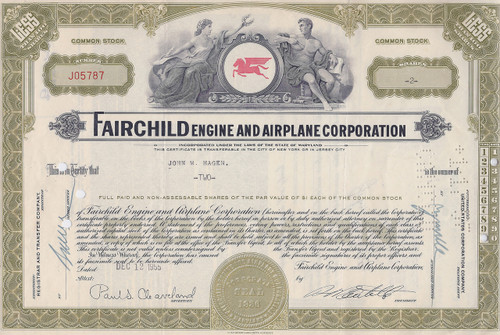 The company was founded by Sherman Fairchild in 1924 as Fairchild Aviation Corporation, based in Farmingdale, and East Farmingdale, New York. It was established as the parent company for Fairchild's many aviation interests. The company produced the first US aircraft to include a fully enclosed cockpit and hydraulic landing gear, the Fairchild FC-1. At some point they were also known as the Fairchild Aircraft Manufacturing Company. The Fairchild Aircraft Ltd. of Longueuil, Quebec, Canada was an aircraft manufacturer in the period 1920-1950. It served as a subsidiary of the Fairchild company of the United States. The Fairchild Engine company was formed with the purchase of the Caminez Engine Company in 1925. In 1929 Sherman Fairchild purchased a majority stock interest in Kreider-Reisner Aircraft Company of Hagerstown, Maryland. Fairchild moved to Hagerstown in 1931.

Besides designing and building aircraft, Fairchild pioneered the commercial use of aerial photography. Many of its first aircraft like the Fairchild FC-2 were originally designed for that purpose, because the cameras of those days were extremely heavy and required flying steady at a high altitude for that era. In 1935 Fairchild was hired by the US government to do aerial photograph surveys of the United States to track soil erosion and its effects. A Fairchild aircraft, the Virginia, was taken as one of three aircraft by Richard E. Byrd on his 1928–1929 expedition to the South Pole. It was used for test flights and reconnaissance.

Among its activities during World War II was producing PT-19/PT-23/PT-26 (Cornell) and AT-21 trainers, C-82 Packet cargo planes and missiles. The Fairchild AT-21 Gunner, a twin-engine trainer, was manufactured at a former rayon mill in Burlington, North Carolina. Also large numbers of the Fairchild Type 24 (C-61) were produced for the military and postwar, the civilian market. Fairchild ranked 73rd among United States corporations in the value of World War II military production contracts.

The Fairchild C-119 Flying Boxcar was a US military transport aircraft developed from the World War II C-82 Packet. The C-119 was designed to carry cargo, personnel, litter patients and mechanized equipment with the ability to make "paradrops" of cargo and troops. The first C-119 made its initial flight in November 1947, and by the time production ceased in 1955, more than 1,100 C-119s had been built for use in the USAF and other air forces including the Royal Canadian Air Force.

In 1949, the Fairchild Engine and Airplane Corporation (based in Hagerstown, Maryland) started work on the C-123 Provider, the transport officially entering service in 1955. In 1954 Fairchild purchased the American Helicopter Company, incorporating it and the XH-26 Jet Jeep as a division. In 1956, the company acquired rights to the Fokker Friendships, producing 206 of the aircraft as the Fairchild F-27 and Fairchild Hiller FH-227. During the 1950s, Fairchild was a large subcontractor to Boeing for B-52 fuselage sections and wing panels. Later they would build F-4 Phantom tail sections, F-14 Tomcat tails, and Space Shuttle stabilizers.

Their association with Boeing would continue into the 1980s building wing controls surfaces for 747s and 757s. In 1964, the company purchased Hiller Aircraft, changing its name to Fairchild Hiller and producing the FH-1100, until 1973 when the helicopter division was sold back to Stanley Hiller. In 1965, the company acquired the Republic Aviation Company.

Following the death of its founder, Fairchild changed its name to Fairchild Industries in 1971, before purchasing Swearingen and manufacturing the Fairchild Swearingen Metroliner, a successful commuter aircraft. During 1971 and 1972, the company developed what would become the Fairchild Republic A-10 Thunderbolt II "Warthog", prevailing over rival Northrop YA-9.  In 1984, aircraft production ceased in Hagerstown, Maryland.

After the company's takeover of Dornier's civil assets in 1996, the company was renamed Fairchild Dornier. The company commenced production of the Dornier 328 in 1998 under license from Daimler Benz Aerospace. In December 1999, Fairchild Aerospace Corporation was acquired by German insurer Allianz A.G. and the United States investment group Clayton, Dubilier & Rice Inc. for $1.2 billion. In 2003, the assets of Fairchild were purchased by M7 Aerospace and the new company was relocated to San Antonio. On December 15, 2010, M7 was purchased by the United States subsidiary of the Israeli defense contractor Elbit Systems.