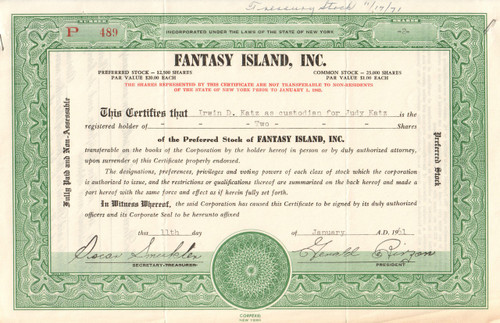 Fantasy Island opened in 1961 in Grand Island NY and went bankrupt in 1982. It was acquired out of bankruptcy by Charles Wood, the original owner of Storytown USA. He sold the park to International Broadcasting Corporation (IBC) in 1989, and later re-acquired the park in 1992 when IBC went bankrupt. The second time Wood owned the park he changed the park's name to Two Flags Over Niagara Fun Park, a name it kept until 1994 when local businessman Martin Dipietro purchased the park and redubbed it Martin's Fantasy Island. Originally the park only occupied 12 acres of land. It expanded to 85 acres  in 1974.

The park's Silver Comet roller coaster, opened in 1999, was created in the style of the original Comet roller coaster that was located at nearby Crystal Beach, Ontario for many years. In fact, the original Comet was stored at Fantasy Island after Charles Wood purchased it in 1989. Wood would later move the Comet to his Great Escape park in Queensbury, New York, where it was reassembled in 1994 and remains in operation to this day.