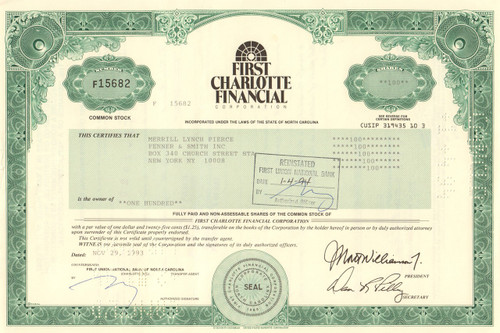 Incorporated 1986 in Charlotte, North Carolina. Merged with Centura Banks in 1993. Centura became part of the Royal Bank of Canada in 2001.  Interesting vignette of the company logo and name.  Issued and cancelled. Dated 1993

Press Release dated 9/15/93 about its merger with Centura:

Centura Banks Inc. (NYSE: CBC) and First Charlotte Financial Corporation (FCFC) in Charlotte, N.C., announced today they have reached an agreement to merge. Under the agreement, FCFC shareholders will receive .627 shares of Centura common stock for each share of FCFC's common stock, or $13.17 per FCFC share based upon Centura's closing stock price of $21.00 on Sept. 14, 1993. In connection with the transaction, FCFC has granted Centura the option to purchase up to 19.9 percent of FCFC's outstanding stock under certain conditions. FCFC, which has assets of approximately $168 million and deposits of $148 million as of June 30, 1993, has five offices in Charlotte.

"This is a very important strategic move for Centura," said Robert R. Mauldin, Centura's chairman and president. "To be a truly effective statewide bank, you must have a presence in Charlotte. First Charlotte Financial Corporation is an outstanding organization, and we are alike in many ways. We are delighted to have found such an excellent partner in such a dynamic market."

"We are looking forward to joining forces with a strong community-oriented North Carolina bank," said Worth Williamson, president and chief executive officer of FCFC. "As a result of Centura's asset size, we feel our customers will benefit from a broader spectrum of services and from larger lending limits, and our shareholders will have the opportunity for greater growth and liquidity in their investment."

The merger with FCFC is expected to be completed by the end of 1993 and is subject to a number of conditions, including approvals by FCFC shareholders and regulatory authorities. Centura also has mergers pending with First Savings Bank of Forest City, N.C., Canton Savings Bank of Canton, N.C. and Robeson Savings Bank in Lumberton, N.C. With more than $3.2 billion in assets, Centura Banks Inc. offers a broad range of personal, business and trust services. It operates 136 offices in 79 communities located throughout North Carolina.