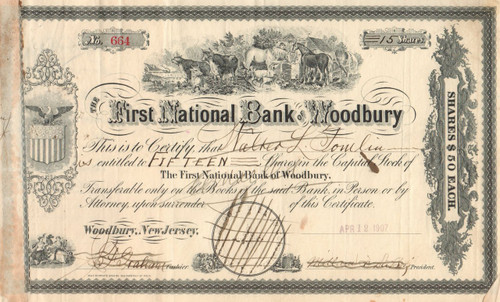 Great banking collectible with unique engraved vignette of cattle and horses in a farming scene with a train in the distance.  Issued and cancelled. Ledger stubs or glue stains to the left. Dated 1907-1912 (as available).  From issued examples, the company used this same stock certificate through life of its business.

Woodbury is a city in Gloucester County, New Jersey, in the United States and is located across the Delaware River from Philadelphia.  As of the 2010 United States Census the city's population was 10,174.  Woodbury is the county seat of Gloucester County. Woodbury was originally formed as a borough on March 27, 1854, within Deptford Township, based on the results of a referendum held on March 22, 1854. On January 2, 1871, Woodbury was reincorporated as a city.