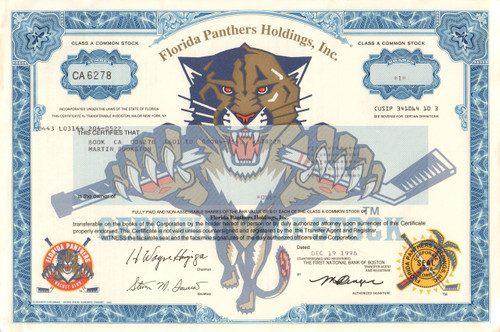 Very graphic stock certificate with the Florida Panthers Hockey Club logo in full color across the face the piece. Dated 1996 with the printed signature of H Wayne Huizenga as chairman. The company is no longer publicly traded so this makes it a difficult to find piece. Great hockey fan gift.

The Florida Panthers are a professional ice hockey team based in the Miami metropolitan area. They are members of the Atlantic Division of the Eastern Conference of the National Hockey League (NHL).  The team initially played their home games at Miami Arena, before moving to the BB&T Center in 1998. Located in Sunrise, Florida, the Panthers are the southernmost team in the NHL.

The Panthers began playing in the 1993–94 NHL season. The team has made one appearance in the Stanley Cup Finals, in 1996, the only season in which the Panthers have ever won a playoff series, eventually losing the Finals to the Colorado Avalanche. The team advanced to the Stanley Cup playoffs for the second time in 12 years in 2012, but were eliminated in seven games in the Eastern Conference quarterfinals by the New Jersey Devils, who eventually won the Eastern Conference championship that season.

Blockbuster Video magnate Wayne Huizenga was awarded an NHL franchise for Miami on December 10, 1992, the same day The Walt Disney Company earned the rights to start a team in Anaheim that would become the Mighty Ducks. At the time, Huizenga owned both the newly founded Florida Marlins of Major League Baseball and a share of the National Football League (NFL)'s Miami Dolphins. The entry fee was $50 million, but despite fellow Florida team Tampa Bay Lightning starting play the year before, the NHL did not consider it to be a case of territory infringement. Huizenga announced the team would play at the Miami Arena, sharing the building with the National Basketball Association's Miami Heat, until a new arena was built. Offices for the team were only established in June 1993, while vice president of business operations Dean Jordan conceded that "none of the business people, myself included, knew anything about hockey.

The new franchise would join the NHL for participation in the 1993–94 season, along with the Mighty Ducks of Anaheim. The Panthers' and Ducks' roster was filled up in both the expansion draft and the 1993 NHL Entry Draft in June 1993, hosted by Quebec City; that draft produced ten players who would eventually be a part of the 1996 Eastern Conference-winning team.