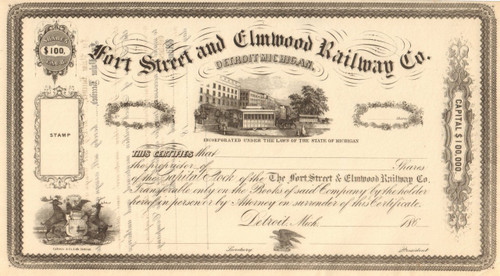 Very nice railroad collectible.   Nice horse-drawn trolleys with city buildings in the background. Michigan state seal at the lower left. Unissued and not cancelled. Dated 186_. Circa 1866 from company records.

Became part of the Detroit Suburban Railway.  Between the years 1863 and 1900 approximately twenty-nine streetcars companies had operated either horse-drawn or electric powered streetcars along streets in and around the city of Detroit.  By the year 1897, there were only three city companies remaining.  The largest and oldest of the companies -- the Detroit  Citizens  Street Railway (a successor to the Detroit City Railway, the city's original 1862 franchise holder) -- also held the controlling interest in the two smaller companies.  After surviving the final legal battle involving Hazen S. Pingree's 10-year attempt to take-over their street railway operations, representatives from the three remaining city companies, along with the previously consolidated suburban railway operation, announced to the press on December 30, 1900, that all of the streetcar systems in the Detroit area were to be consolidated into one new system.

The Detroit  Citizens  Street  Railway, the Detroit  Electric  Railway, the Detroit, Fort  Wayne and Belle Isle  Railway, and the Detroit  Suburban  Railway were all to be absorbed into the newly formed Detroit  United  Railway. This new company, better known as the DUR, would begin operations on Monday, December 31, 1900. The DUR continued to expand into the early 1920s through new construction and the acquisition of smaller concerns. After the DUR acquired the Detroit-Jackson line in 1907, it operated more than 400 miles of interurban lines and 187 miles of street city street railway lines.