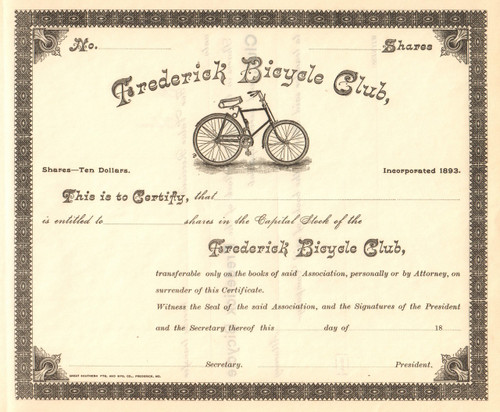 Amazing early bicycle stock certificate with the perfect vignette of an 1890's Pope Manufacturing bike. Unissued and not cancelled. Circa 1893 from the incorporation date.

Articles of incorporation of the Frederick Bicycle Club were filed 1893 in the office of the Clerk of the Circuit Const, Frederick Maryland. The incorporators were: Victor M. Marken, John A. Kennedy, William T. Delaplaine, John J. Bielfeld and George Birely.  The club sponsored events and bicycle races in the area.

Interest in the upkeep of roads was revitalized in the late 1800s by the introduction of the bicycle. At first, bike riding was confined to city streets. In 1887, the League of American Wheelmen with 30,000 Maryland members was formed, and became a propaganda agency for good roads. The Frederick Bicycle Club led local efforts during the 1890's.

In the 1880s, Frederick County contained ten macadam turnpikes and 1,200 miles of county roads. By 1910, automobiles had become common, and car owners demanded additional improvements in road conditions. In 1900, there were 14,483 miles of roads in Maryland of which 13,118 miles were dirt. Of the remaining 1,365 miles of improved roads in the state, 890 were "stone" roads, 225 were surfaced with gravel, and 250 miles were surfaced with oyster shells.