Fuhrmann and Schmidt Brewing Company circa 1911 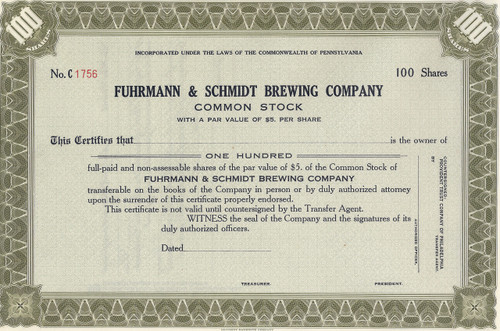 Fuhrmann and Schmidt Brewing Company circa 1911

Plain but uncommon beer company cert.  The company was a smaller regional brewer that had a steady coal miner clientele from the area.

Founded in 1896 by German immigrants Max Schmidt and P.H. Fuhrmann, the origin of F&S beer actually dates to 1854, when Thomas Richards and John B. Douty started Eagle Run Brewery, a small ale and porter producer situated at the base of two mountains across Route 61 from what is today the west end of Tharptown. In December 1871, Martin Markle purchased the brewery from the Douty family and made extensive improvements. Around that time, Markle began manufacturing what would later become F&S beer.

Philip Henry Fuhrmann was born in Frankenthal, Germany, on June 16, 1863. He received his education there, later moving to Dubois, Pa., in 1883. The following year he became a salesman, then plant superintendent for Chas. D. Kaier Company, a popular brewery in Mahanoy City. By 1885, Fuhrmann, who had accrued $25,000 in company stock, sued Kaier for not properly managing the brewery while he was on vacation in Germany. Founder Charles Kaier bought Fuhrmann's stock and terminated his employment. In 1895, Fuhrmann moved to Shamokin and began negotiations to purchase Eagle Run Brewery from Markle. The sale was completed March 2.

Max Schmidt was born in Schlawe, Prussia (now Germany), on Dec. 30, 1858. He received his education in his native country and in 1877 came to America, first living in New York, then Shenandoah. Schmidt and his brother, Frank, studied the dry goods business and established a general store, which they operated until 1896, when Max moved to Shamokin. That same year, he formed a partnership with Schmidt and incorporated the Fuhrmann and Schmidt Brewing Company.

The Eagle Run plant employed at least 60 people in 1908. The plant contained a storage facility that allowed an output of 50,000 barrels, an ice plant of 25 tons daily capacity and a charcoal and gravel filtering system that killed germs from water taken from Eagle Run. When the popularity of the beer increased, the brand name was changed from Eagle Run Beer to Fuhrmann and Schmidt Pilsner. The firm also established bottling plants in several communities, including Gettysburg and Carlisle.

Looking to expand production, F&S purchased the defunct Shamokin Brewing Company in the city's Fifth Ward for $77,000 at a bankruptcy sale on April 26, 1912. The 11 lots included in the sale were home to a four-story brick brewing plant and office building that contained various pieces of equipment and machinery. Over the next several years, F&S also purchased several adjoining properties in order to facilitate future expansion.

A fire virtually destroyed Eagle Run Brewery on Jan. 19, 1916. It was rebuilt, although details of how soon couldn't be obtained. That fire wasn't the only bad news for the company - Prohibition was coming in 1920. Anticipating that drastic change, Fuhrmann and Schmidt incorporated the Shamokin Pure Food Products Company and transferred the deed from F&S to Pure Food on Oct. 1, 1917. The plant was retooled and used to process food products, such as salad dressings and vinegar.