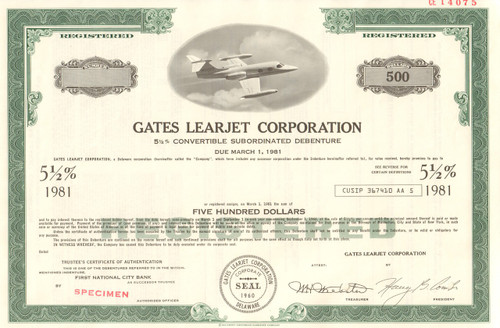 Learjet is a Canadian owned, American manufacturer of business jets for civilian and military use. Founded in the late 1950s by William Powell Lear as Swiss American Aviation Corporation, it has been a subsidiary of Canadian Bombardier since 1990, which markets it as the "Bombardier Learjet Family".

Learjet was one of the first companies to manufacture a private, luxury aircraft. In the 1940s, with World War II still fresh in the public's mind, Lear's preliminary design was based upon an experimental American military aircraft known as the Marvel, substituting fuselage-mounted turbojet engines for ducted fan turboshaft engines.  However, that preliminary design was abandoned and the final Learjet design was instead adapted from a Swiss ground-attack fighter aircraft, the FFA P-16.

The basic structure of the Swiss P-16 aircraft was seen by Bill Lear and his team as a good starting point to the development of a business jet, and formed the Swiss American Aircraft Corporation, located in Altenrhein, Switzerland. Although building the first jet started in Switzerland, the tooling for building the aircraft was moved to Wichita, Kansas, in 1962. LearJet was in a temporary office which opened in September 1962 while the plant at Wichita's airport was under construction. On February 7, 1963 assembly of the first Learjet began. The next year, the company was renamed the Lear Jet Corporation.

On April 10, 1967, Bill Lear's approximately 60% share of the venture was acquired by the Gates Rubber Company of Denver, Colorado. Lear remained on the company board until April 2, 1969, when the company was merged with Gates Aviation Corporation and was renamed Gates Learjet Corporation. In 1971, the first Model 25 was flown. This aircraft later became the successful Learjet 35. That year, the company was awarded the President's "E" Award for promoting export sales.

In 1974, the worldwide Learjet fleet had exceeded the one-million flight hours mark and in 1975 the company produced its 500th jet, both industry firsts. By late 1976 the company increased monthly aircraft production to ten. On August 24, 1977, the Learjet 28 made its first flight. It was based on the Learjet 25, but received a completely new wing fitted with winglets. These resulted in both improved performance and fuel economy and inspired the name "Longhorn" for the short-lived Learjet 28/29 and for some of the more successful models that followed.

In 1984, Gates Learjet announced the start of their Aerospace Division, a high technology endeavor. However, by the end of the year the company had ceased production of its commercial jets in an effort to reduce inventories. This lasted until February 1986, when the company headquarters were transferred to Tucson, Arizona, and production was restarted both in Wichita and Tucson.

On September 10, 1985, the Aerospace Division was awarded a contract to produce parts for the Space Shuttle's main engines. In 1987, Gates Learjet was acquired by Integrated Acquisition and the next year the name was changed to Learjet Corporation. By January 1989, all production had been moved from the Tucson facility back to Wichita with an employment of 1250.

In 1990, Canadian company Bombardier Aerospace purchased the Learjet Corporation. The aircraft were then marketed as the "Bombardier Learjet Family". On October 10, 1990, the Learjet 60 mid-sized aircraft had its first flight, followed on October 7, 1995 by the Learjet 45. In October 2007 Bombardier Learjet launched a brand new aircraft program, the Learjet 85. It was the first FAR Part-25 all-composite business aircraft. Bombardier celebrated the 45th anniversary of the first flight by a Learjet with 2008's Year of Learjet campaign. One of its highlights was British Formula One racing driver Lewis Hamilton racing a Learjet and winning an event at the Farnborough Air Show.