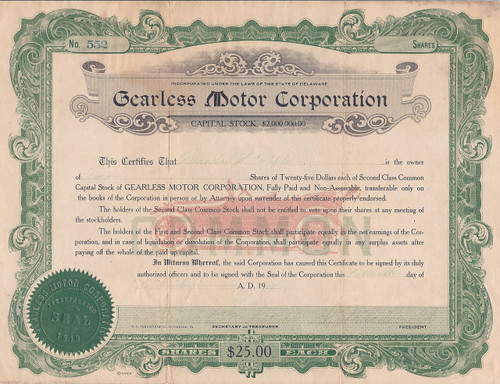 Very rare stock certificate with a great underprinted early automobile on the face of the piece.  The touring car red print makes this piece very desirable. This piece is issued but the ink has faded to be barely legible. Incorporated in Delaware but believed to operate in New York.

Gearless Motors operated 1919-1922 and was one of several companies which attempted to market a successful steam automobile in the early 1920's. The Gearless, produced as a roadster and touring car at $2,650 and $2,550 respectively, had two separate 2-cylinder double-acting slide-valve steam engines for power, and was available with either wood or wire wheels. Production was minimal, but sale of stock was robust. In 1923, the company failed when four of its officials were charged with mail fraud and conspiring to sell more than $1,000,000-worth of company stock fraudulently.

This is only the second known piece in the collector market.  Perfect item for the old car collector or enthusiast.