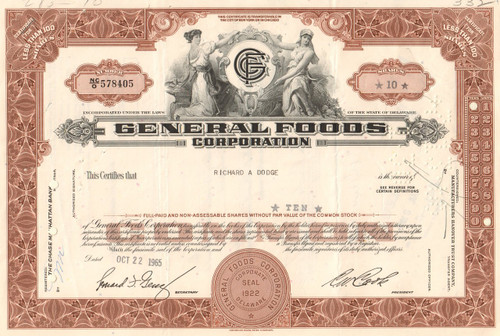 C. W. Post established his company in Battle Creek, Michigan, having lived there since 1891, when he was a patient at a holistic sanitarium operated by Dr. John Harvey Kellogg. Dr. Kellogg, with his brother W.K. Kellogg, had developed a dry corn flake cereal that was part of their patients’ diet. Post's first product, introduced in 1895, was not a cereal, however, but a roasted, cereal-based beverage, Postum. Having developed an aversion to coffee during his time in the sanitarium, Post positioned Postum as a healthy alternative. Its advertising slogan, which he coined himself, was "There's a Reason". Postum's main ingredients were naturally caffeine-free wheat grain, bran, and molasses. Initially, Postum had to be brewed like coffee, but in 1911, Post introduced a powdered, instant formulation. This version of the product was manufactured in Battle Creek until it was discontinued in 2007.

In 1897, Post introduced his first dry cereal, a crunchy blend of wheat and barley, which he called Grape Nuts. His first corn-flake product, originally called "Elijah's Manna", appeared in 1904. Owing to consumer resistance to the biblical reference (even Great Britain flatly refused to register the name as a trademark), it was renamed Post Toasties in 1907.

C.W. Post was an astute businessman who believed that advertising and aggressive marketing were the keys to a successful enterprise. Within 10 years of its incorporation, his Postum Cereal Company had more than $10 million in capital and was spending $400,000 a year on advertising, sums which were remarkable for the period. Although he vigorously opposed labor unions, his employees were the highest-paid in his industry and working conditions at the Post factory were exemplary. He even developed a factory town in which he sold homes to his workers at favorable rates.

Postum Cereal Company lost its founder in 1914. C.W. Post underwent an apparently successful appendectomy at the Mayo Clinic, but shortly after returning home to recuperate, he died of a self-inflicted gunshot wound. Post had for years suffered from bouts of illness and depression. While his death was without warning, his company was not left rudderless. His daughter, Marjorie Merriweather Post, had been raised in the business and was familiar with virtually every aspect of its operations. She assumed control of the now $20-million Postum Company and managed its affairs for the next eight years. While she did not oversee major product innovations, she did have a good feel for business and for promoting talented managers. In addition, her second marriage, in 1920, was to Edward F. Hutton, the founder of a brokerage firm on Wall Street.

Starting in 1925, under the leadership of financier (and at one point, son in-law to the founder), E. F. Hutton as chairman and Colby M. Chester as president, Postum Cereal made the first of a series of corporate acquisitions which would within a few years transform it into the dominant U.S. packaged grocery products manufacturer.

It began late that year with the purchase of the Jell-O Company. Jell-O had been first produced in 1897 by Pearl B. Wait. His product was based on a patent that had been issued to Peter Cooper, the inventor and industrialist, in 1845, but which Cooper had never developed commercially. However, Wait was unsuccessful in marketing Jell-O, and in 1899, he sold the rights to it for $450 to a neighbor, Orator Francis Woodward, who had founded the Genesee Pure Food Company in 1897. Genesee became the Jell-O Company in 1923, the same year it began marketing D-Zerta, a sugar-free gelatin, and a powdered mixture for making ice cream in the kitchen.

In 1926, Postum Cereal acquired Igleheart Brothers, Inc (established in 1856), the makers of Swans Down cake flour, and followed this with the purchase of the Minute Tapioca Company. "Tapioca Superlative" had been invented in 1894 by a Boston woman, Susan Stavers, who made it from tapioca flakes that she ran through her coffee grinder. Later that year, she sold the rights to John Whitman, of Orange, Massachusetts, who changed its name to "Minute Tapioca". In 1908, he changed the name of his company to that of his product. The "Minute" brand would later become better known for a General Foods innovation introduced in 1949 known as Minute Rice, a brand of parboiled rice.

The acquisition spree continued in 1927 with the purchase of two similarly named confectionery companies, chocolate-maker Walter Baker (founded in 1765, making it the oldest component of the Postum constituent companies), and coconut-processor Franklin Baker, which had begun earlier in the 19th century as a flour broker, but whose confectionery products dated from 1895. This was followed by the purchase of Log Cabin Products, the maker of Log Cabin Syrup (first produced in 1887), and of Richard Hellmann, Inc (established in 1913), the producer of Blue Ribbon mayonnaise. And late in the year, Postum Cereal began selling its first coffee product, "Sanka", by obtaining US marketing rights from Dr Ludwig Roselius of Bremen, Germany. Roselius had developed the decaffeinated coffee in 1906 and began selling it in the US in 1923.

Three more acquisitions followed in 1928. The most important was that of the Cheek-Neel Coffee Company. Its product, Maxwell House, dating from 1892, was a well-known brand in what was still a fragmented US coffee market. Within a few years, however, it was to become the number one brand in America and would retain that position well into the 1980s. Also acquired during 1928 was the La France Manufacturing Company, a maker of starch and other laundry products (this being Postum's first venture into non edibles), and the Calumet Baking Powder Company, the leading maker of this kitchen essential.

By far the most important acquisition of 1929 was of the frozen-food company owned by Clarence Birdseye, called General Foods Company. Birdseye (December 9, 1886 - October 7, 1956) was one of the most important entrepreneurs in the history of the food industry. Born in New York City, he became interested in the frozen preservation of food during the course of working as a fur trader in Labrador between 1912 and 1916. By 1923, he had developed a commercially viable process for quick-freezing foods using a belt mechanism, which he patented. In 1924, with backing from three investors, he formed the General Seafoods Company, in Gloucester, Massachusetts, to produce frozen haddock fillets packed in plain cardboard boxes.

The founder's daughter, Marjorie Merriweather Post, was first to become excited about the prospects for the frozen foods business. In 1926, she had put into port at Gloucester on her yacht, Sea Cloud, and was served a luncheon meal which, she learned to her amazement, had been frozen six months before. Despite her enthusiasm, it took Post three years to convince Postum's management to acquire the company.  Following this acquisition, Postum, Inc changed its name to General Foods Corporation. Goldman sold its share back to General Foods in 1932, apparently at a slight loss.