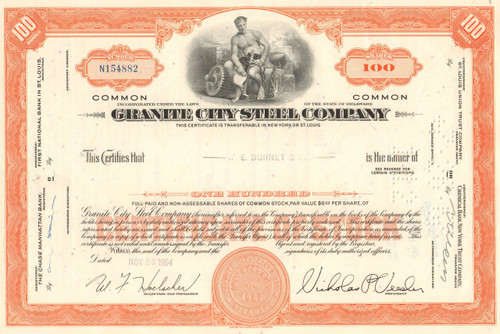 Granite City Steel Company traces its history back to 1878, when the mills were opened in St. Louis. Frederick and William Niedringhaus founded their operations for the St. Louis Stamping Company that would eventually become Granite City Steel.

It is the oldest operating flat roll carbon steel producer in the Western Hemisphere. Other than a shut down in 2008-09 for six months - they have operated continuously since 1878. It currently operates as United States Steel, Granite City Works, Coke and Iron Division.

Granite City, Illinois has a rich and varied history.  Prior to its founding in 1896, it was home to various tribes of Native American Indians and was then settled by French and later English and German immigrants.  During the boom of the Industrial Revolution, Granite City became a prime location for industrial growth due to its central location and access to the Mississippi River.

The City was then founded by the Niedringhaus brothers that brought the industrial revolution to Old Six Mile.  As people began to move here from all over the nation and the world, the City began to grow up around its industrial base.  Over time, things began to change, as they always do.  We are still an industrial town and thousands of people still rely on the steel mill to put food on their table, but the city, like the country is not as industrial as it once was.