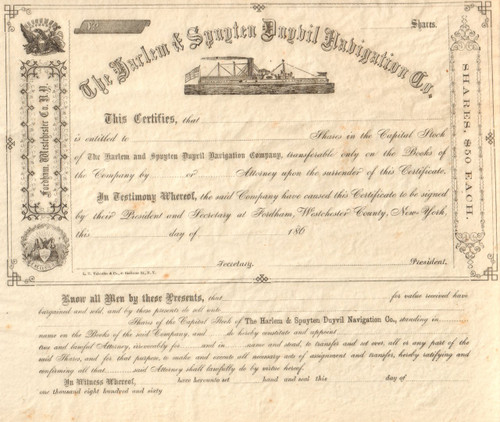 Great  old paddlewheel steamboat vignette on this piece. Delicate piece with unusual bottom share issuance form that would duplicate the share info.  Unissued and not cancelled.

Spuyten Duyvil Creek is short tidal estuary connecting the Hudson River to the Harlem River Ship Canal and then on to the Harlem River in New York City. The confluence of the three separate the island of Manhattan from the Bronx and the rest of the mainland.  The Bronx neighborhood of Spuyten Duyvil lies to the north of the creek, and as a result of the construction of the ship canal and its subsequent in-filling, so does Manhattan's Marble Hill neighborhood.

Spuyten Duyvil Creek runs northeast into the Hudson. When the Dutch settlers arrived they found its tidal waters turbulent and difficult to handle. Though its tides raced was no navigable watercourse joining it with the headwaters of the Harlem River, which flowed southwest into the East River. Steep cliffs along the Spuyten Duyvil's mouth at the Hudson prevented any bridge there, but upstream it narrowed into a rocky drainage. There a Dutch nobleman who had sworn allegiance to the Crown upon the British takeover of New Netherlands, Frederick Philipse, built the King's Bridge in 1693.

Originally a merchant in New Amsterdam, Philipse had purchased vast landholdings in what was then Westchester County. Granted the title Lord of Philipse Manor, he established a plantation and provisioning depot for his shipping business upriver on the Hudson in present-day Sleepy Hollow. His toll bridge provided access and opened his land to settlement. Later, it carried the Boston Post Road. The span was sited near and ran roughly parallel to what is now West 230th Street in the Bronx, with its south end in an area then and until 1914 physically part of Manhattan.

Over time the channels of the Spuyten Duyvil and Harlem River were joined and widened, but transit was still difficult and confined to small craft. With the advent of large steamships in the second half of the 19th century a broad shipping canal was proposed to allow them thru-transit by bypassing the tight turn up and around Marble Hill. Construction of the Harlem River Ship Canal began in the early 1890s and was complete by 1895.

The effect of channeling through what had been West 222nd and 223rd streets was to physically isolate Marble Hill on the Bronx side of the new strait. In 1914 the original creek bed was filled in and the temporary island, comprising present-day Marble Hill, became physically attached to the Bronx, though it remained politically part of the borough of Manhattan, as it is today.

Another channel was dug in 1937[4] to the west of the 1895 realignment straightening the Spuyten Duyvil towards the Hudson. It pared off a protruding tip of the Bronx, which was absorbed into Manhattan's Inwood Hill Park, home now to its Nature Center.