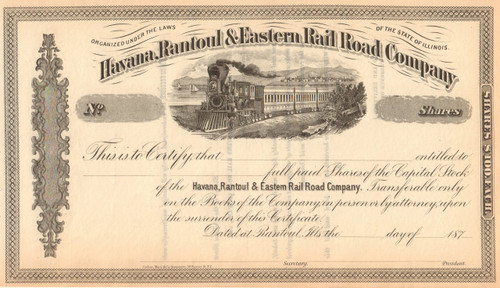 Rare piece with a great vignette of a steam train pulling passenger cars with city and sailboats in the background.  Unissued and not cancelled. Circa 1873 from company records.

The Havana, Rantoul & Eastern RR Co. was created in January 1873 for a line from Havana Illinois to a point near the Illinois-Indiana border.  In Indiana, the oddly named Mississippi & Atlantic Railroad Company was chartered to extend the line to West Lebanon IN.

Because of con artists posing as railroad builders had burned the local population in the past, funds were hard to raise.  Construction was finally started in the Summer of 1875, by the beginning of 1876 the line had been built between Fisher and Alvin Illinois.  The 12 miles from Alvin to West Lebanon Indiana was put into service on December 1st, 1878.  And by February the following year, line had been extended from Fisher to Le Roy Illinois.  Le Roy would be as close as the line would ever get to Havana.